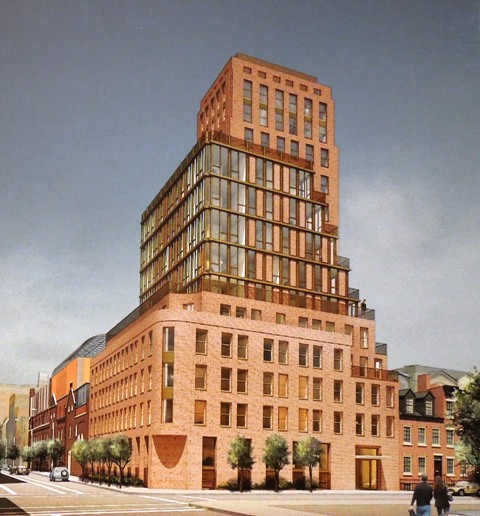 Contentious St. Luke in the Fields Proposal Asked to Be Revised – Landmarks Commissioners Concerned about Scale, Materials and Siting

The Church of St. Luke in the Fields, which occupies a plot between Hudson, Barrow, Christopher, and Greenwich Streets in the Greenwich Village Historic District, has applied to construct a new building on a parking lot at the southwest corner of its campus. The project, a 153-foot-tall brick and glass tower, has been widely reported in the press, and was even dubbed by Curbed as one of the 10 most heated preservation battles in the city right now.  According to the architects, Beyer Blinder Belle, the proposed building’s placement across the street from the 176-foot-tall Archive Building, an Individual Landmark outside of the historic district, justifies the proposed building’s height. Local elected officials, Community Board 2, preservation advocates, neighborhood associations and roughly 30 area residents disagreed and spoke in strong opposition to the project at the February 4th Public Hearing at the Landmarks Preservation Commission.  HDC specifically noted that the 1969 designation report for the district calls out the existing campus as “the most significant ensemble in the West Village, and the earliest in date” and goes on to lament “some of the later buildings around this block stating, “The complete lack of rapport between these structures and the older houses glaringly illustrates the process of attrition which is taking place and the need for architectural controls for one of the most interesting and historical areas of The Village.”

Due to time constraints, the Commission delayed its discussion of the proposal until March 11. At this Public Meeting, the Commissioners generally found the proposed new building to be too tall for the district and too overwhelming for the block, suggesting that it should be lowered and turned to face away from the low-rise district to be less of a confrontation. The Commissioners worried about the precedent that such a building would set in justifying height according to buildings and views outside of historic districts. Other common criticisms were the building’s unnecessarily “fussy” use of many different materials to draw attention to itself and its “bland” brick articulation.

Also part of this proposal is a two-story rooftop addition to the adjacent St. Luke’s School, which would be constructed of brick to match the existing 1950’s building and a series of “youthful” aluminum panels in shades of terra-cotta and orange to respond to the color variation of the brick below. The Commissioners were split on the use of these panels, with some calling for the colors to be toned down and others praising their “exuberance.”

The Commission has asked that both components of this proposal be revised and brought back for further review. Stay tuned for updates! In an almost unprecedented move, two groups – the Gowanus Alliance and the Gowanus Canal Community Development Corporation – are protesting the proposed listing of the Gowanus Canal Historic District on the New York State and National Register of Historic Places. The nomination is based on a community-driven campaign to  place the area on the Register in recognition of its importance to the history and development of New York City, its archaeological resources and its distinctive collection of vernacular commercial and residential architecture. The  Friends and Residents of Greater Gowanus (FROGG) began their campaign to have the area recognized for its historic importance almost ten years ago and, as part of the environmental investigation around the proposed clean-up of the Canal, the NYS Office of Historic Preservation declared the area eligible for National Register listing in 2006. In 2011, HDC chose Gowanus as one of our “Six to Celebrate” and supported their successful application for a $7,500 grant from the Preservation League of New York State to help pay for the necessary research for the nomination. The research led to a nomination which was scheduled to be voted upon by the State Review Board on March 13. However, the State Historic Preservation Office was contacted by New York City’s Law Department which requested a postponement of the vote for 60 days while city officials evaluated the proposal. Under state law, the City has a right to request this delay, but only has limited authority to modify the details of the proposal. We were alerted to the City’s request earlier this week with the rationale that notice of the listing worked its way very slowly to the various city agencies who deal with the area, so they needed additional time – an excuse made somewhat plausible by the change in administration but still disturbing given the outreach and  broad public awareness of this proposal.

Much more disturbing is the push against the listing by the two organizations. As quoted in the Daily News:

“We don’t think it’s a progressive way of looking at Gowanus,” said Paul Basile, the founder of the Gowanus Alliance, who owns several one-story commercial warehouses on Baltic and Seventh Sts. that fall within the proposed district lines. “This would severely limit future development and kill job growth,” said Bill Appel of the Gowanus Canal Community Development Corp., which delivered a joint letter to hundreds of area property owners earlier this month urging them to reject the proposal. On the Gowanus Alliance’s website, a letter is posted which states “this proposed district could impose significant costs, complications, and restrictions on development, construction, renovation, maintenance and the operation of our properties”. It goes on to state that SHPO approval will be required for permits such as shoreline stabilization permits, NYS Housing financing or HUD funding, which will “inflict costly, undue burdens on the affected property owners”.

These comments do not make sense. The area was declared eligible for the National Register in 2006, which means that for the past 8 years, the State Historic Preservation Office has been reviewing and commenting on any permits which involve state or federal government actions or funds. The regulatory “burden” – what little there is – has been in place for 8 years. The sole change that listing the district on the Register would be to make it possible for projects in the district to apply for NY State and Federal tax credits for rehabilitative work. That’s it. It is entirely voluntary – listing on the Register does not place private development under any kind of regulation. It encourages investment and economic development with tax incentives. But that is only a by-product of the listing. The real purpose of listing on the National Register is to acknowledge and raise awareness of the importance of a site to the history of our country, to change the conversation from “the notoriously polluted Gowanus” to “the canal which built Brooklyn”. It seems that some people are happier with deriding and demeaning the neighborhood than celebrating it. Let’s not let their bleak vision triumph.

Please contact Mayor Bill de Blasio and tell him to let the State Review Board vote on the Gowanus Canal Historic District. http://www.nyc.gov/html/static/pages/officeofthemayor/contact.shtml

Please permit the NYS Review Board to vote on the Gowanus Canal Historic District. Listing the area on the National Register of Historic Places will only encourage economic development and investment in the neighborhood. This is a community-driven plan which is business and development friendly, and lifts the community up by acknowledging the Canal’s importance in the development of our city. There are no new regulations or requirements which will be triggered by this designation, only the possibility of incentives to development.