468 Broome Street – SoHo-Cast Iron Historic District
CERTIFICATE OF APPROPRIATENESS
An Italianate style store and loft building built in 1860. Application is paint the ground floor of the building.
HDC finds this proposal to be fully inappropriate. The proposed color will detract from the building’s otherwise monochromatic composition and draw unnecessary attention to itself. This is particularly problematic given that 464,466 and 468 are meant to be read as a single composition. A more complete presentation of the building’s entire façade and its neighboring context would show this discordant condition clearly. We ask the Commissioners to reject this proposal.

LPC-22-06618
323 West 87th Street – Riverside – West End Historic District
CERTIFICATE OF APPROPRIATENESS
A Renaissance Revival style rowhouse designed by Francis A. Minuth and built in 1889. Application is to construct a rooftop addition and replace a transom window.
HDC would like to commend the applicant on a very modest and sensitively considered proposal. In particular, the proposed restoration work is thoughtful. The decision to keep the building’s bulk more compatible with its neighbors is a responsible way to work within historic districts. 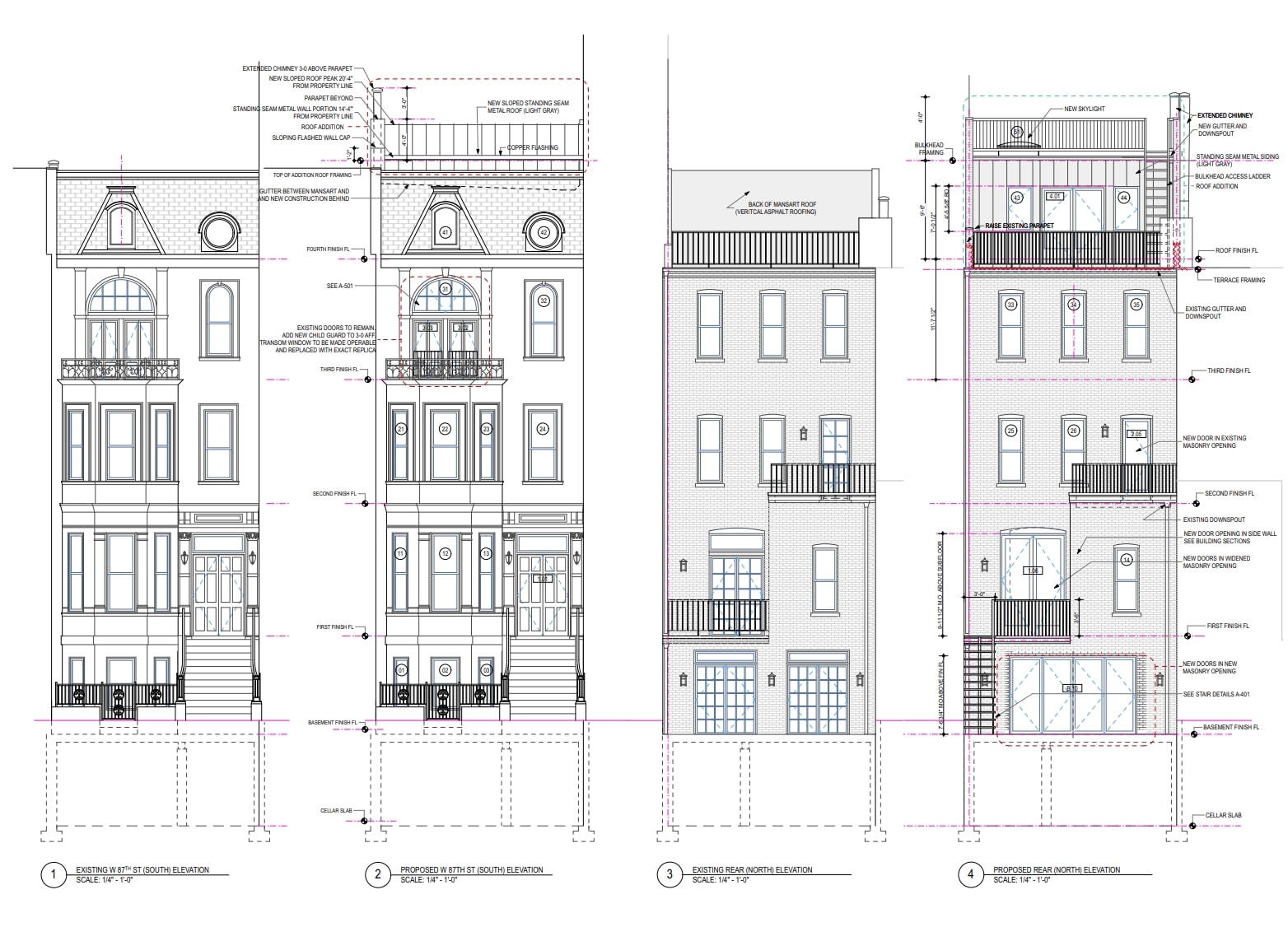 105 East 64th Street – Upper East Side Historic District
CERTIFICATE OF APPROPRIATENESS
A rowhouse designed by W. P. & A. M. Parsons built in 1881-1882, and later altered c. 1941. Application is to construct a new building.
HDC finds the proposed change to the buildings floor to floor heights and aspects of its new bulk to be inappropriate and as such the proposal should be rejected in full.
105 East 64th is one of a row of 5 rowhouses originally built in 1882. Those five houses have been substantially altered over the years, but throughout their existence they have always shared unbroken alignment of their floor to floor heights, window sill and head heights, and cornice lines. Any alterations to this building at the present time should respect the basic original underlying grid of this row of houses. HDC can imagine a façade design that uses the classical language proposed in this application but one that is developed and applied using the basic geometry of the row.
This proposal contains a number of precedent images for buildings that have had their facades replaced with early 20th century and more recent neo-classical facades. We appreciate this effort, but want observe that in the majority of these precedent images the floor to floor heights have been maintained and the basic pattern of fenestration remains aligned with neighboring structures.
There is no compelling architectural or programmatic reason for altering the floor to floor heights of this building and for expanding its bulk on the 3rd and 4th floor. In fact the introduction of basically uniform floor to floor heights eliminates a pleasing hierarchy from this façade, it is perhaps this game that is resulting in a series of awkward façade issues.
The change in floor to floor heights also increases the visibility of the added mansard floor more than necessary, thereby interrupting the handsome roof profile of the Howell house at the corner of Park and 64th.
The extension of the 3rd and 4th floor plates beyond their original line, the loss of the rear yard cornice line, and the elimination of the three punched window openings on these two floors are also unacceptable violations of the generally accepted rules for altering and expanding rowhouses.
It is for these reasons that we believe that LPC should reject this proposal and ask the applicant to develop a design that adheres to the rules laid out in the LPC guidelines for extensions and additions. We believe that incorporating these rules into this proposal will in the end result in the creation of a well-proportioned, handsome, and urbanistically more elegant solution. 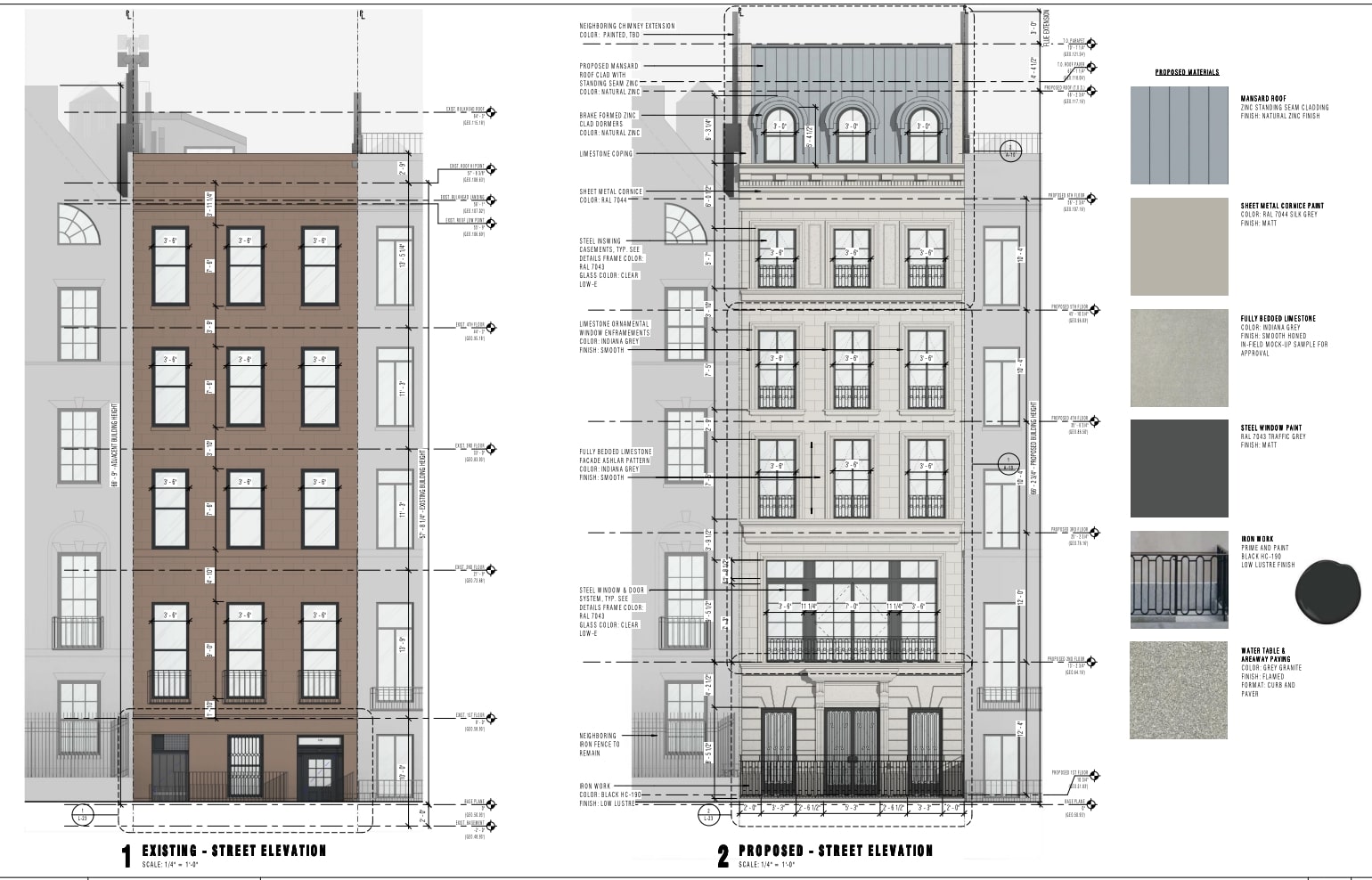 LPC-22-07982
1002 Madison Avenue – Upper East Side Historic District
CERTIFICATE OF APPROPRIATENESS
A neo-Federal style bank building built in 1930. Application is to replace entrance infill and screen the windows.
Architect: HS2 Architecture
HDC appreciates the goal of this proposed façade work but finds the solution to be inappropriate. We believe the wood elements including the columns, pilasters and entablature, as well as the fan light, should be maintained. Perhaps then the minimalist games can be played with the door and side lights. 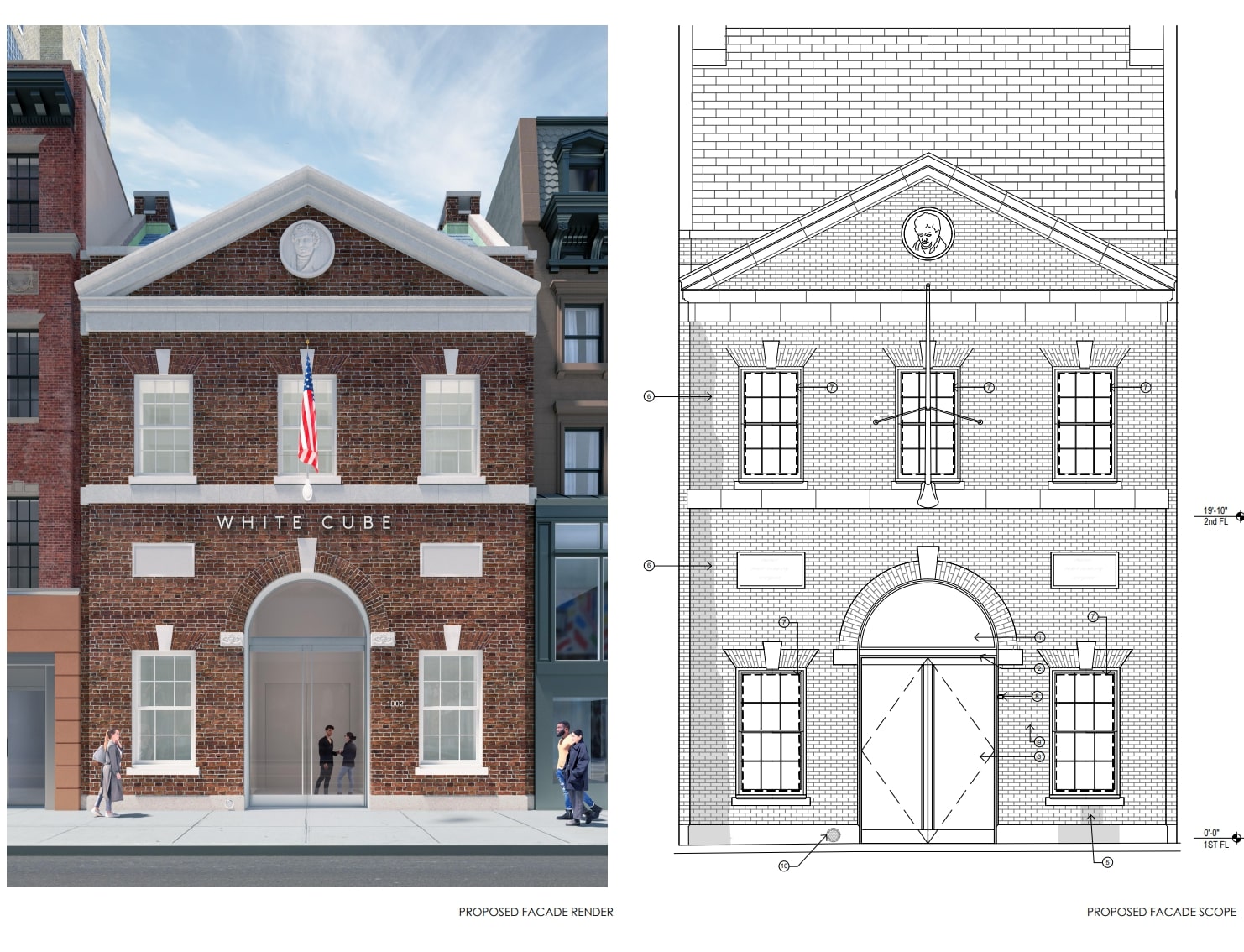 LPC-22-10603
Central Park – North Meadow Center – Scenic Landmark
CERTIFICATE OF APPROPRIATENESS
A building constructed c. 1910, within an English Romantic style public park, designed in 1857 by Frederick Law Olmsted and Calvert Vaux. Application is to modify masonry openings, replace infill, and install retaining walls, storage enclosures, paving and fencing.
HDC is generally supportive of these proposed renovations. We do want, however, to emphasize the importance of carefully detailing the proposed changes to stonework, such that the new openings are of the same quality as the original structure. 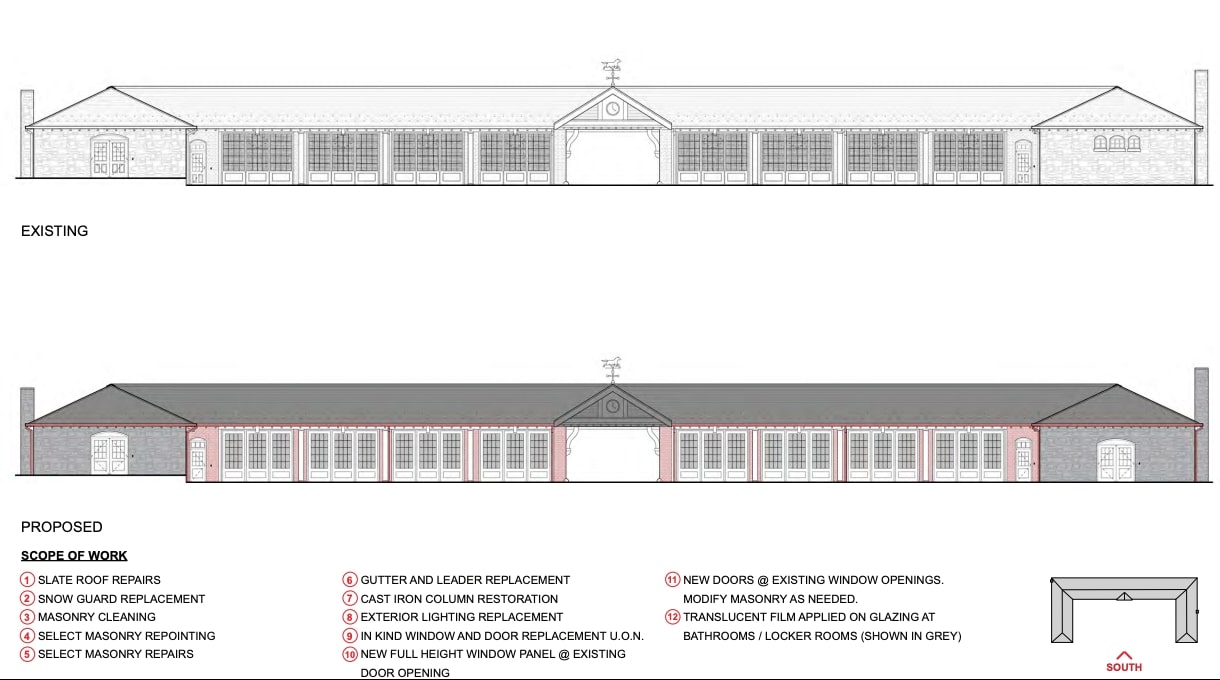