Linkedin
Certificate of Appropriateness Testimony
LPC-21-10217
7 Fillmore Place – Fillmore Place Historic District
CERTIFICATE OF APPROPRIATENESS
An altered Colonial Revival style garage building built in 1912. Application is to replace windows, doors and ironwork, and construct a rooftop addition and other rooftop elements.
Architect: Andre Gomez
HDC is generally supportive of this proposal. However, two items are of concern to us. First, we do not think the glass guard rail is appropriate in this particular application. It is too visible and reflective. We believe a black steel system and some sort of handsomely designed wire mesh would be a more appropriate and better functioning solution.
Second, HDC is unclear whether the applicant is restoring the corbelled brick cornice on this building. We would ask LPC to confirm that the full street-facing façade is to be properly restored and all of its modest but wonderful details maintained. 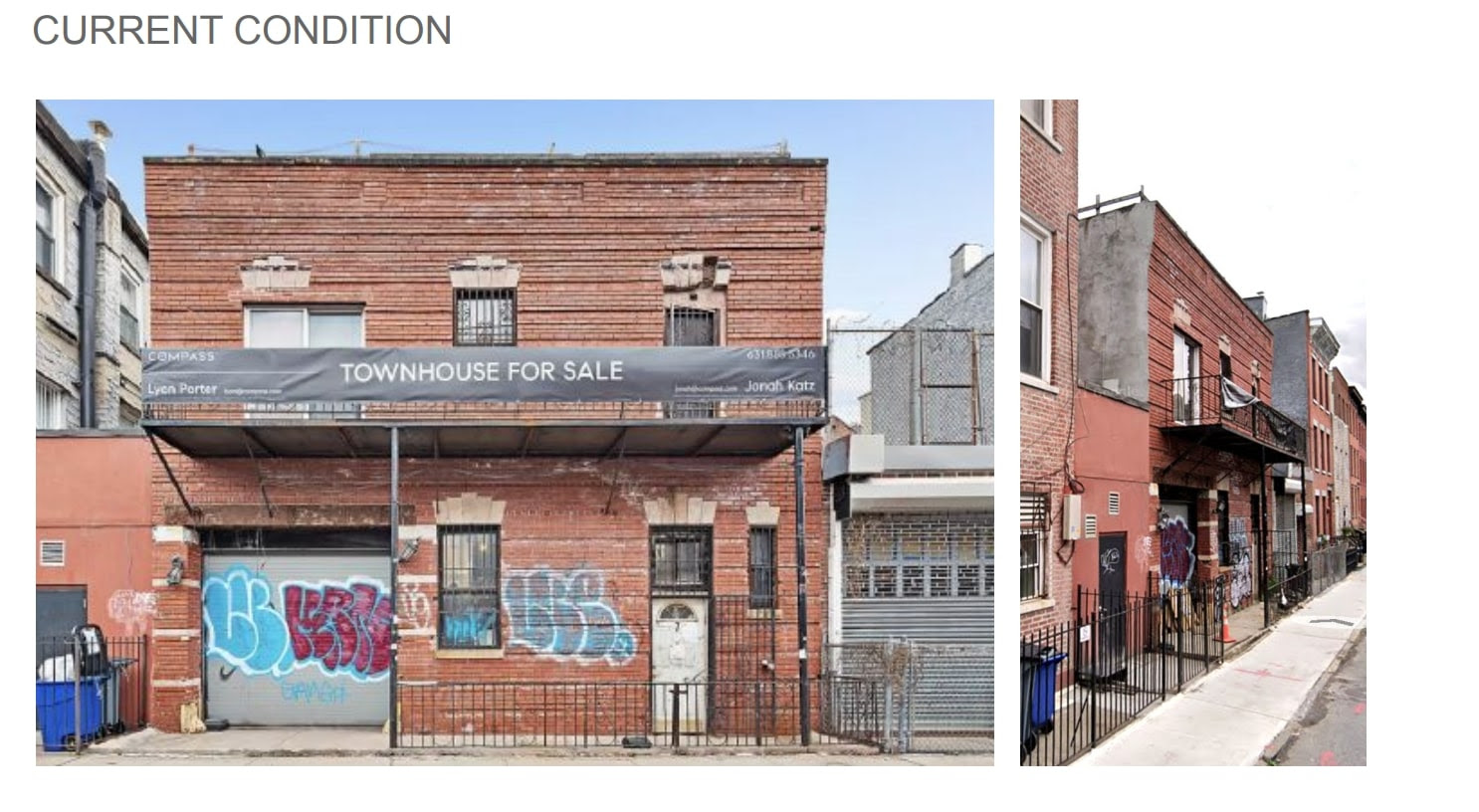 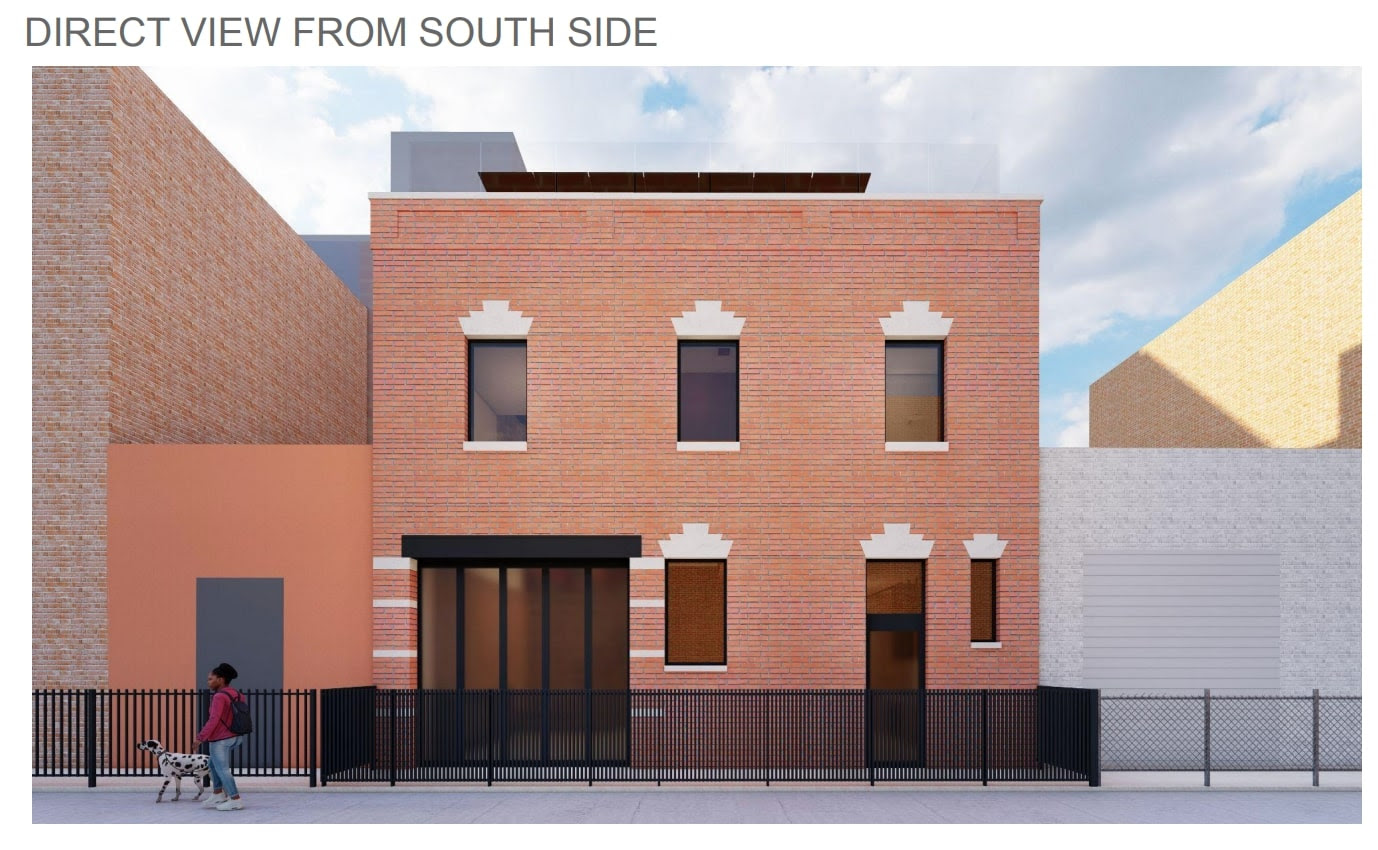 LPC-21-00794
418A Lewis Avenue – Bedford-Stuyvesant/Expanded Stuyvesant Heights Historic District.
MISCELLANEOUS – AMENDMENT
An altered rowhouse built c. 1870-71. Application is to legalize the installation of a lift and other alterations at the front façade and areaway and the construction of a rear yard addition completed in non-compliance with Certificate of Appropriateness 19-17191.
Architect: PACS
HDC finds this application inappropriate. Given the resources being invested in expanding the footprint of the building, the developer and architect should be required to find a more elegant solution to providing ADA access to this building.

LPC-22-09815
113 Jane Street – American Seamen’s Friend Society Sailors’ Home and Institute – Individual Landmark
CERTIFICATE OF APPROPRIATENESS
A neo-Classical style lodging house designed by William A. Boring and built in 1907-08. Application is to alter the areaway, install a lift and replace infill, construct rooftop and rear yard additions, and install other rooftop elements.
Architect: Stonehill Taylor
HDC is generally supportive of this application. We would like to see some form of the cupola restored to the building’s turret in addition to fully restoring this building’s handsome profile, it would be a very nice place for a cocktail. 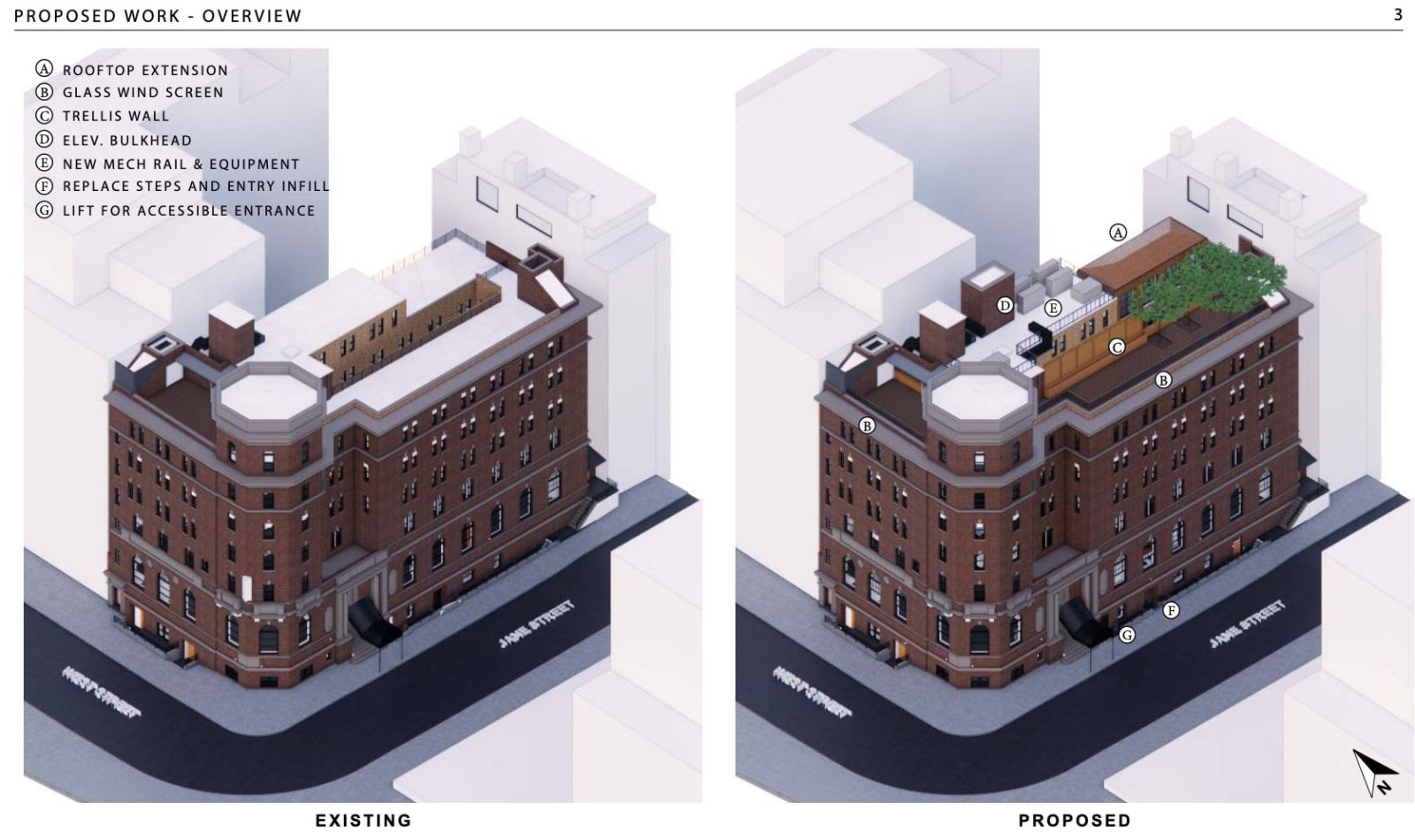 244 West 11th Street – Greenwich Village Historic District
CERTIFICATE OF APPROPRIATENESS
A rowhouse built in 1842 and altered in the 1920s. Application is to alter the front and rear façades, excavate the areaway and rear yard, alter the roof, and construct a rear yard addition.
Architect: O’Neill Rose
HDC finds the second floor portion of the extension inappropriate. Maintaining the top two floors of the rear wall of rowhouses results in a more handsomely balanced façade and keeps the bulk from overwhelming the neighboring buildings. We would also like to see the rear yard extension be slightly less glassy and a bit more opaque.
HDC would also request that the applicant work with LPC to give the rooftop skylight on the front façade some form of muntins or mullions as a way to maintain its original proportions.
Finally, HDC finds the uppermost roof deck to be completely inappropriate, superfluous and unlikely to ever actually be used. The visibility of this roof deck interferes with the roof line of this row and should be disallowed. 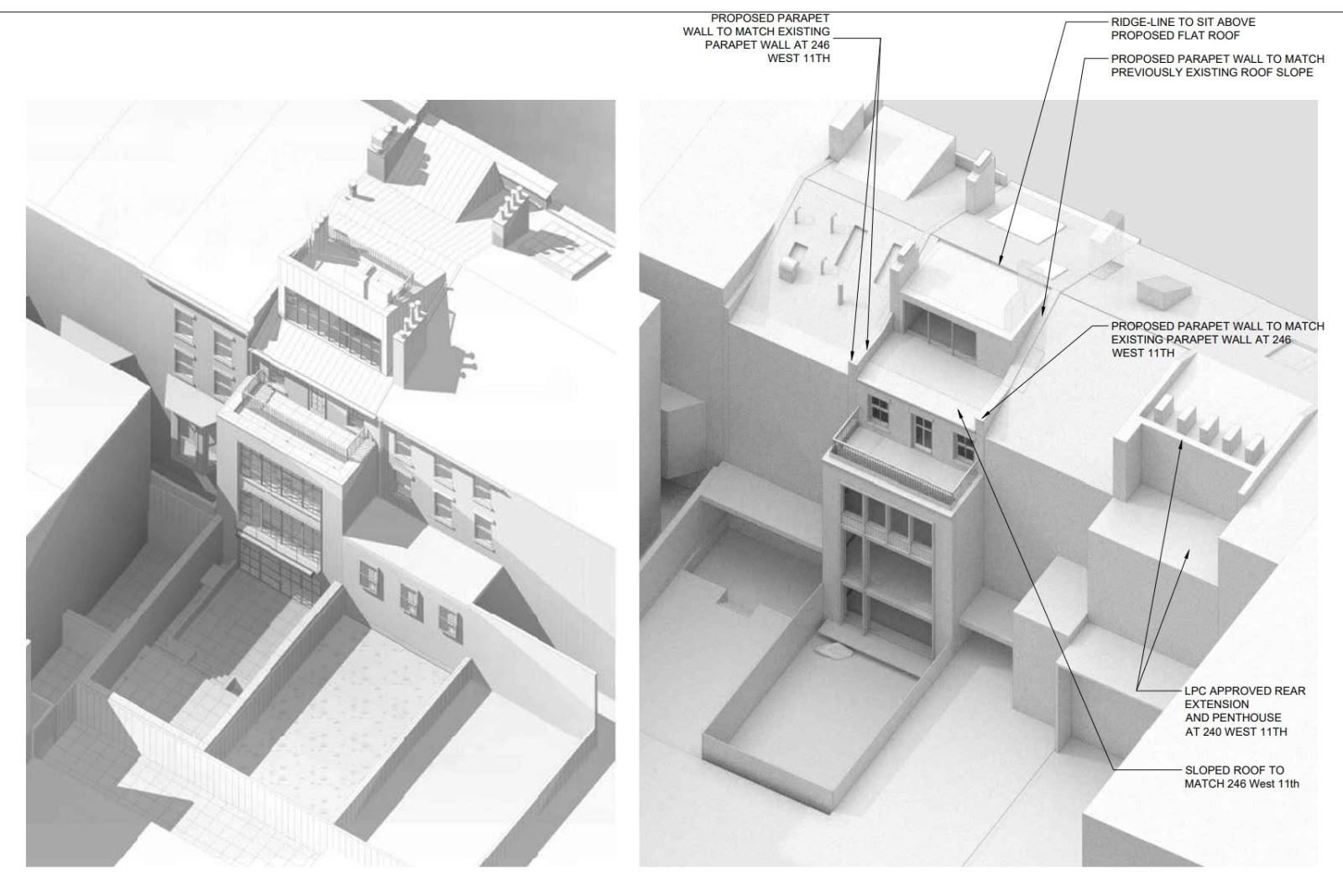 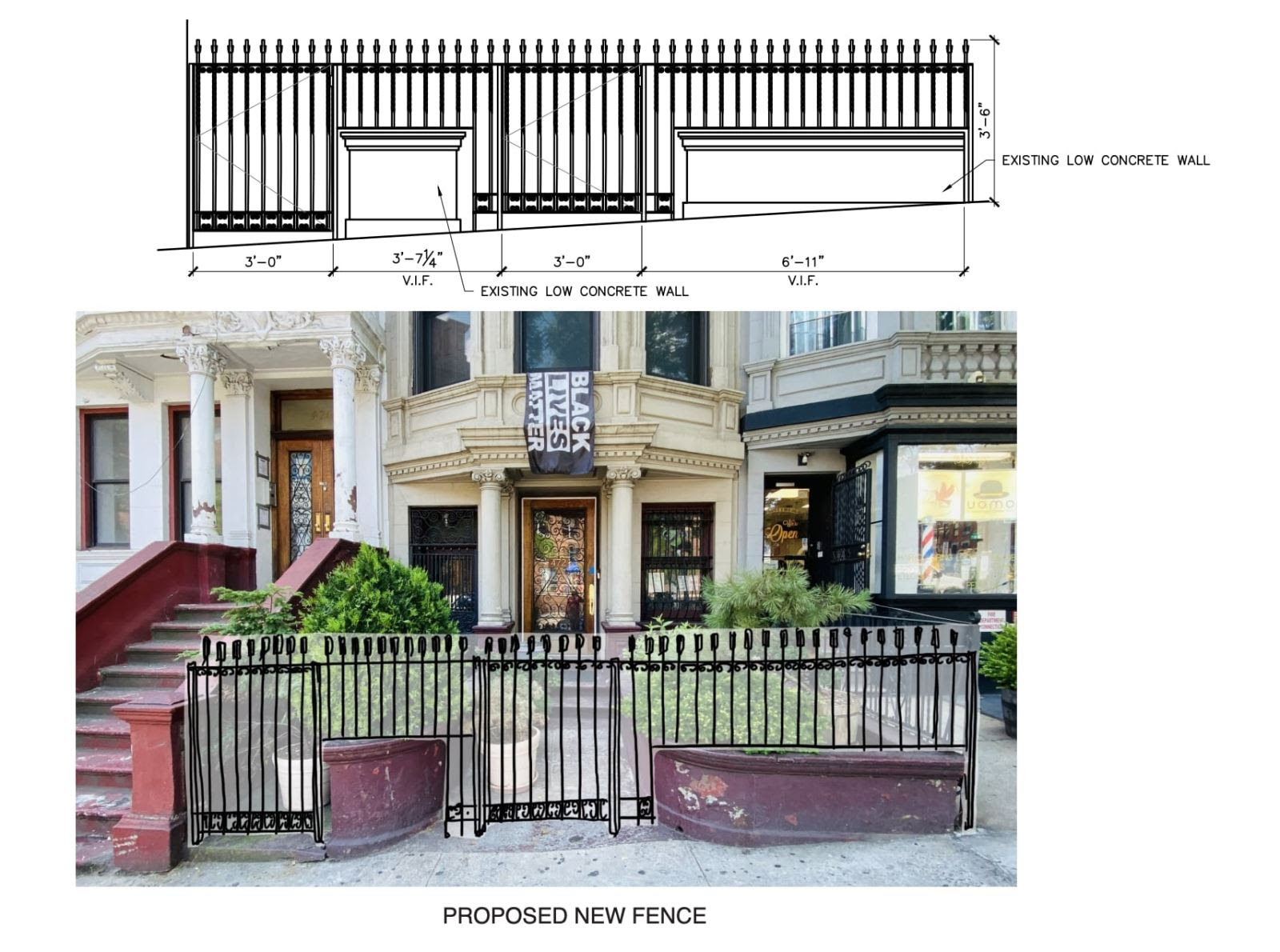