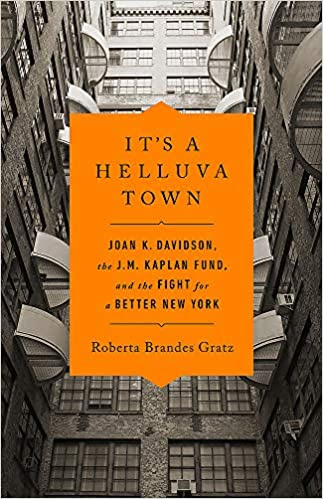 This is the story of Joan K. Davidson and the J.M. Kaplan Fund, New York’s hidden benefactors. “Scratch the surface of so many of the initiatives and ideas that have made New York a better place to live and work and you’ll find the deft hand of the J.M. Kaplan Fund… New York owes much to a wise, energetic, and committed woman, in this case, the Fund’s indomitable leader for many of its seventy-five years, Joan K. Davidson,” wrote Darren Walker, president of the Ford Foundation. Under Joan’s leadership, the Fund helped forward preservation efforts across the city and beyond. Truly, NYC’s vibrant preservation community would be unrecognizable without the longtime support of this stalwart New Yorker who understood the power of good ideas and the importance of making them into reality.

Join the New York preservation community to explore this foundation’s legacy as a patron of the arts and artists, defenders of the natural and built environments, and innovators in activist philanthropy with preservationist and Kaplan Foundation alum Anthony C. Wood and writer Roberta Brandes Gratz, who will delve into the city-changing work of the J.M. Kaplan Fund and Joan K. Davidson, the second-generation leader of the Fund. Davidson is a trustee, president emeritus, and sponsor of a new Fund program, Furthermore Grants in Publishing, which she led after taking a leave from the Fund to serve as Commissioner of the New York State Office of Parks, Recreation, and Historic Preservation in the 1990s.

Roberta Brandes Gratz is an award-winning journalist and author of several books about urban development, including The Battle For Gotham: New York in the Shadow of Jane Jacobs. She co-founded the Center For the Living City with Jane.

Anthony C. Wood is a preservationist, author, teacher, historian, and grantmaker. Currently the Executive Director of the Ittleson Foundation, he has worked for the J. M. Kaplan Fund, the NYC Landmarks Preservation Commission, and the Municipal Art Society. For over 20 years, he was a member of the Adjunct Faculty of the Historic Preservation Program at the Columbia University Graduate School of Architecture Planning and Preservation. He is the author of Preserving New York: Winning the Right to Protect a City’s Landmarks.

Co-hosted by Friends of the Upper East Side, the Historic Districts Council, LANDMARK WEST!, the Municipal Art Society of New York, and Village Preservation.