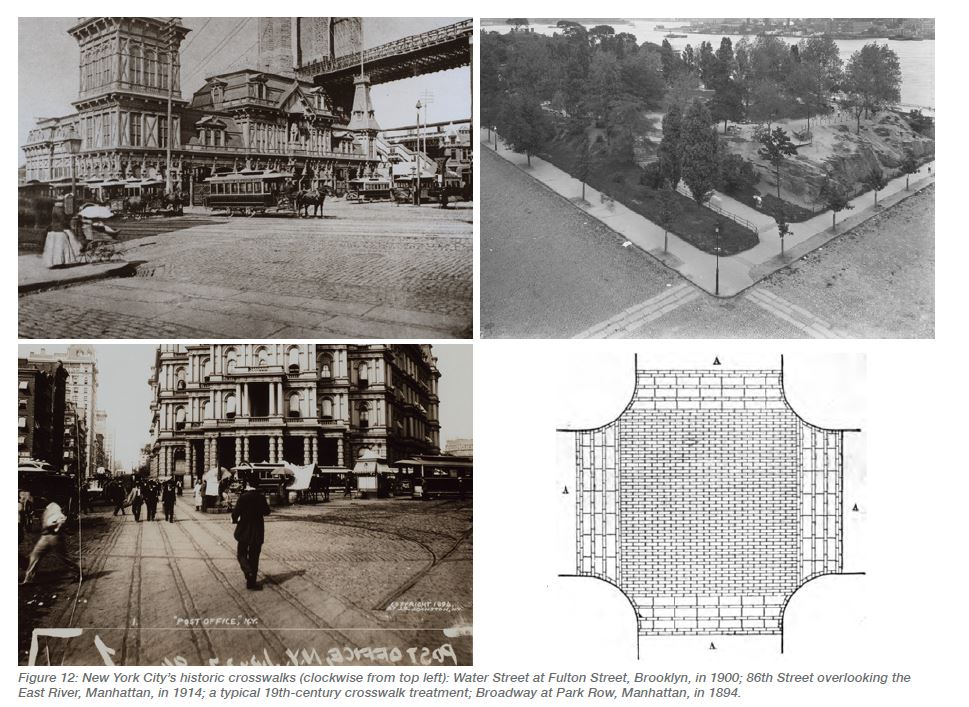 In August 2017, HDC released the first of its kind report about historic paving in New York City. First responding to our report, Crain’s released a story the following Monday morning stating that the beloved Belgian blocks were to be “ripped out.” This began a frenzy of reporting from Brownstoner, the Real Deal, and Next City that the stones were in dire jeopardy.

The good news? The vast interest and concern about these historic streets prompted the agency responsible for them–DOT–to speak up and provide clarity about the fate of the stones: “The Belgian block configuration in DUMBO is not being removed,” DOT spokesperson Scott Gastel told the Brooklyn Eagle. “As part of a full street reconstruction project in the neighborhood, the city will be in large part restoring Belgian block components of the street and in areas requiring ADA upgrades we plan to incorporate the Belgian block structure into the accessible sidewalk components as best we can.”

Although protected features in historic districts, many of these stones are being eroded from the streets. They are ripped up, discarded and paved over by utility companies who incorrectly complete their work. Each stone is supposed to be replaced in kind, but instead, the patches are paved over with cementitious materials which have pock-mocked the streets.

Doreen Gallo, HDC Board member and Belgian blocks’ staunchest advocate keeps watch over her DUMBO neighborhood, explaining that there was no asphalt until the late 1980s. Ms. Gallo laments the lost blocks: “Stuff happens so quickly,” she said, citing a time when she obtained a stop work order that was quickly overruled. “Four hours later the work starts up again. Two dump trucks drive away, full of Belgian blocks.”

If you see workers removing Belgian blocks in an historic district, please take a picture and alert HDC. We can then bring the illegal work to the attention of the Landmarks Preservation Commission. Many thanks to everyone who wrote to HDC about this issue and took the time to read the paving study.