The timeless quality of the Waldorf-Astoria’s interiors, was, until recently, taken for granted by many New Yorkers as something that would always be there. Today’s hearing marks a significant step toward ensuring that these spaces will be protected in perpetuity – that their timelessness will remain – and HDC is thrilled to testify in support of their designation.

When the sale of this building circulated in the media, many were shocked that these spaces were not already designated interior landmarks. Given its function as a hotel for national and international visitors, the protection of the Waldorf grew to be much greater than just a local issue – it became clear that people around the country and around the world love this building and support its preservation. HDC commends the Commission and staff for appropriately weighing the threat of this building’s sale and expeditiously calendaring and holding a public hearing to prevent the loss of an exquisite portrait of our city’s past.

These interiors were designed to be the utmost in hotel opulence in the world. 90 years later, they still evoke this level of grandeur and they survive remarkably intact, in part thanks to a major restoration in 1983. HDC supports the LPC’s assessment of the spaces and their connectivity, protecting the majority of the significant rooms and their corridors and finishes, as this level of craftsmanship will likely never be duplicated in our lifetimes. Highlights include the Park Avenue lobby and its “Wheel of Life” mosaic tile artwork, designed by the 1925 Paris Exposition showcase artist Louis Rigal and composed of 148,000 marble tiles from seven different countries; the Lexington Avenue Lobby and Peacock Alley, which features a clock from the Columbian Exposition of 1893; the Grand Ballroom, Astor and Jade ballrooms, which all retain their original, Art Deco finishes; the Basildon Room, whose finishes were imported from an 18th century country house in Berkshire, England and appropriated seamlessly; and the Silver room, whose wall-covered mirrors were inspired by Versaille’s Galerie des Glaces and which also includes Edward Simmons’ murals of the months and seasons, originally installed in the Astor Gallery in the former 1897 Waldorf on 5th Avenue.

Though not included within the boundaries of the proposed designation, HDC and other preservation groups advocated for the protection of the Starlight Roof on the 18th floor of the hotel. Original remaining features in this space are largely intact and include the Art Deco grille work ceiling, which originally retracted, allowing guests to dine and drink beneath the stars above Park Avenue, keeping cool in the summer months before the advent of air conditioning. There were several hotels in New York City that had similarly landscaped roofs, and many apartment buildings with architecturally designed roofs for the same purpose. The Starlight Roof permanently closed in 1950 to accommodate HVAC, but the room’s ceiling remains architecturally and culturally significant today. While HDC understands the rationale of its disjointed nature from the other spaces because of its high-floor situation, we hope thorough evaluations of this room’s historic resources were considered and that they will not be lost. Perhaps the LPC can work closely with the new owner to ensure that should this room become private, the incredible ceiling will not be destroyed. 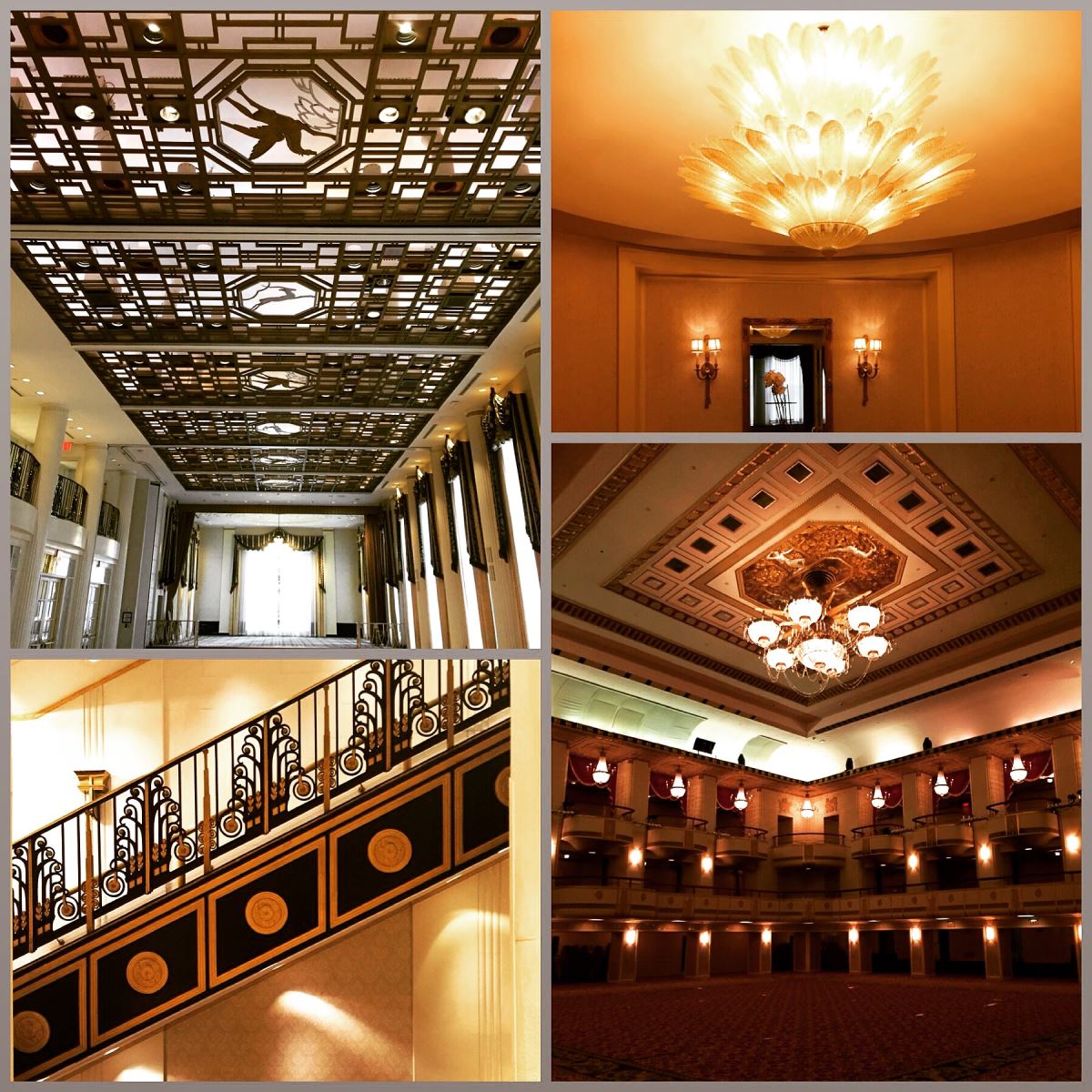 A neo-Colonial house designed by Samuel Lindbloom and constructed in 1926. Application is to construct a rear yard addition.

Though the addition’s depth of roughly ten feet might be a modest “bump-out” dimension, the full-width, full-height configuration makes it very bulky. The solution might be to work on the massing, sculpting the addition in a different way to make it more responsive to the proposed interior program and to the well-considered design of the house itself. Breaking down the bulk of the addition with, perhaps, multiple roof profiles that are subsidiary to the ridge of the main house might be a more sensitive approach. We would also suggest that the addition’s side façades be reconsidered. The lack of detail makes the bump out appear haphazard and tacked on, when some amount of dimension or texture would make the addition more intentional. We also question the addition of the Palladian window, which is quite a grand gesture for this simple, neo-Colonial house.

An apartment building designed by James Stewart Polshek and built in 1984. Application is to alter the ground floor and install storefronts.

Given the residential character of Waverly Place, the proposed storefront infill would represent a significant change, wrapping the commercial character of the Avenue around to the side street. While converting one of the existing bays into a show window might be an acceptable alteration, changing both bays to full-length windows without bulkheads would be an inappropriate intrusion. The building’s base was thoughtfully designed to have storefronts on the Avenue and not on the side street, and HDC feels that this intention should be honored. 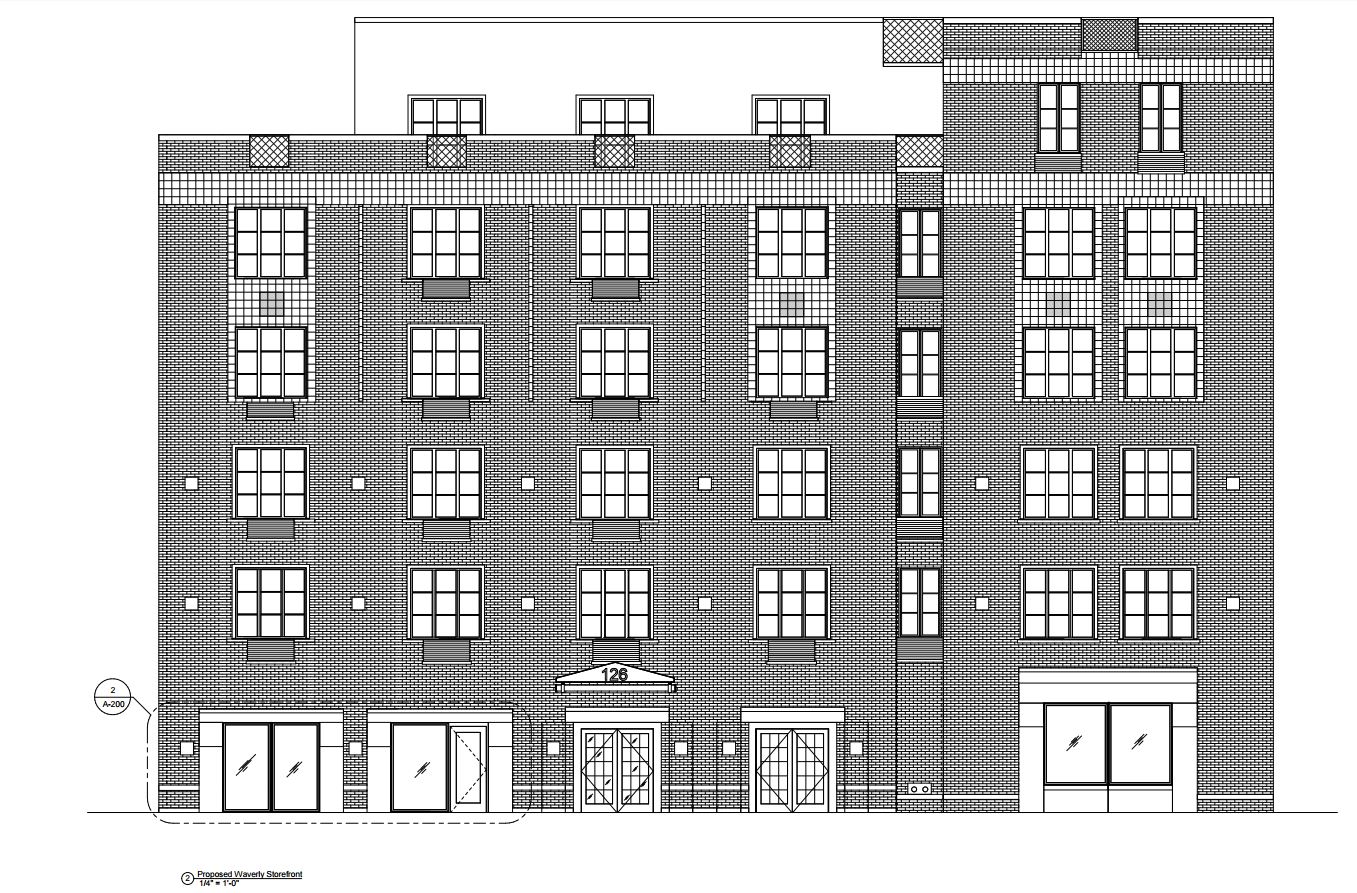 A Romanesque Revival style townhouse designed by George E. Harney and built in 1890. Application is to alter the front and rear façades.

Without any historic precedent for shutters on this house – or on houses of this style – HDC finds little justification for their installation. Since they are not historically accurate, we ask the Commission to reject this aspect of the proposal. We do not have any objection to the changes in the rear. 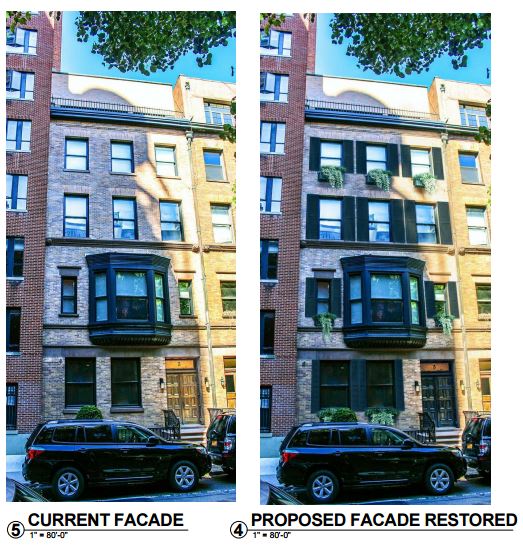 A cast iron store building designed by Griffith Thomas and built in 1872-73. Application is to legalize the removal of vault lights and granite sidewalks in non-compliance with Certificate of No Effect 17-4254.

HDC finds no justification in this application for the removal of the vault lights and granite sidewalks at 453 Broome Street, and feels that the applicant should not be rewarded with an approval for this illegal work. Replacing deteriorated vault lights in kind can easily be done, and should have been done. Both the vault lights and the granite sidewalks are characteristic features of this historic district, and should not be treated as disposable. Further, HDC finds that since the Commission would surely not have approved this work in the first place, it should disapprove this application and ask for a restoration of this mutilated sidewalk. 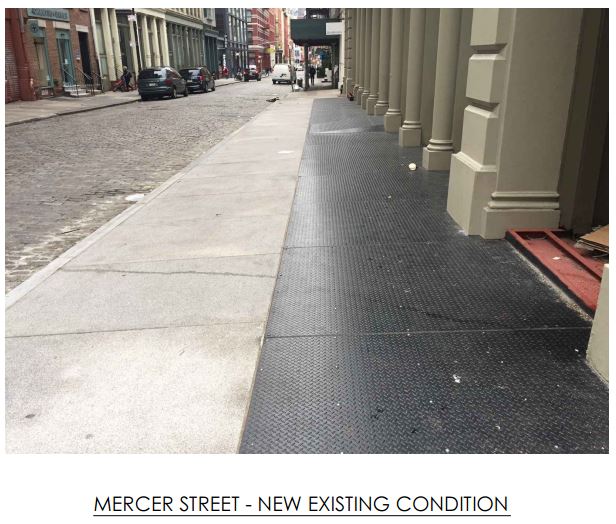