7 Irvington Place – Fiske Terrace-Midwood Park Historic District
CERTIFICATE OF APPROPRIATENESS, Docket #195868
An altered Arts & Crafts style free-standing house with free-standing garage, designed by Slee & Bryson with E.R. Strong and built c. 1913. Application is to alter and enlarge the house and demolish the garage.
This 1913 home has clear historic documentation of its Arts & Crafts style. The proposed alterations, unfortunately, show a complete disregard for this history or style. A minor, minimally-visible expansion might be appropriate, but changing the whole form of the structure removes the historic context from this building. Our committee was puzzled why someone would choose to purchase a home in an historic district and then propose to completely destroy the house.
Moreover, this building is currently designated an Arts & Crafts style building and the proposal will inherently change the style. If this is approved, how will this house still be considered a style building? HDC cautions that permitted work like this could undermine the building’s significance in the future. HDC looks forward to seeing a revised proposal that accentuates, not eliminates, the historic character of this home. 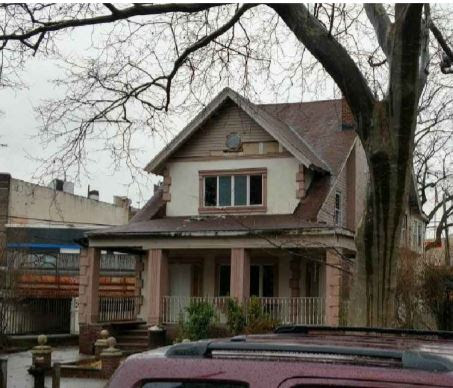 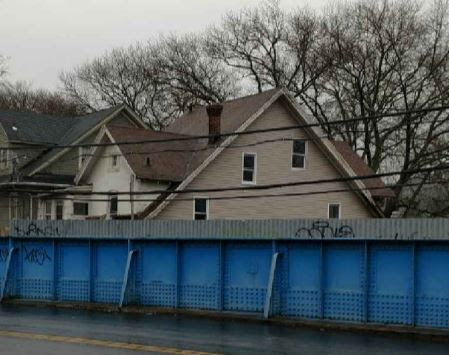 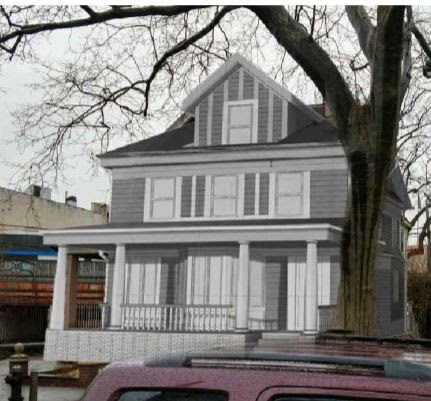 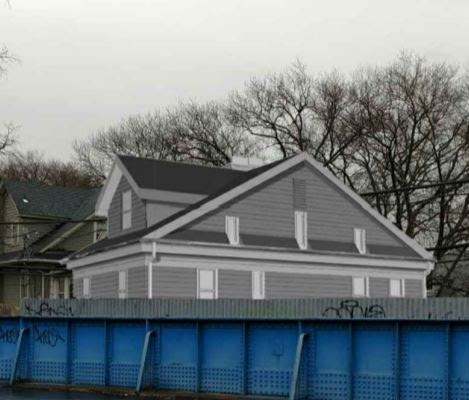 149 Clinton Street – Brooklyn Heights Historic District
CERTIFICATE OF APPROPRIATENESS, Docket #195107
A rowhouse built c. 1900. Application is to construct a rooftop bulkhead and railing, and alter and excavate below the attached garage.
This house is taller than the others in the row already, making the protruding railing and bulkheads’ visibility all the more prominent. HDC recommends the proposed railing be reworked as either a decorative feature of the building, or be set back so that it is not visible. Changing the design of the railing and painting it black to appear as cresting may be a sensitive approach to this problem if it cannot be set back. 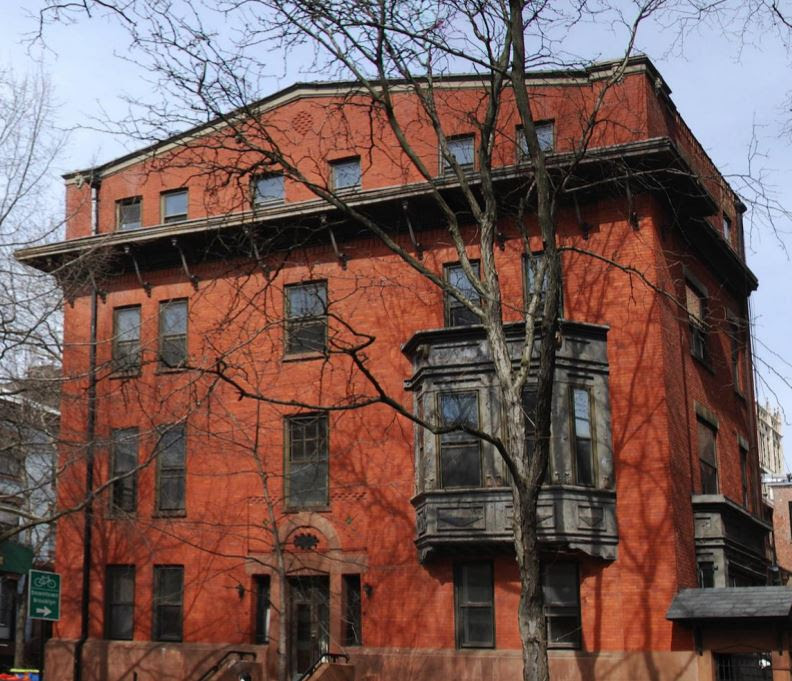 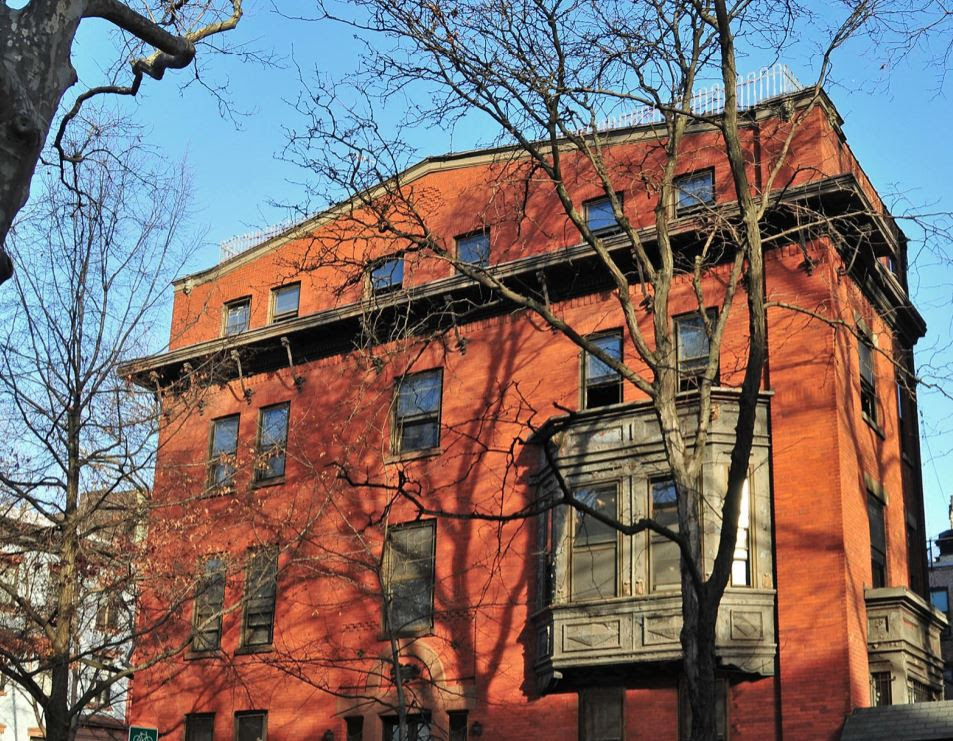 Item 4
220 Park Place – Prospect Heights Historic District
CERTIFICATE OF APPROPRIATENESS, Docket #196400
A neo-Grec/Queen Anne style rowhouse designed by John V. Porter and built circa 1884. Application is to construct a rear yard addition and rooftop bulkheads, perform excavation, alter the railways, and install a ramp.
Originally one of three row houses built together in 1884, 220 Park Place remains the only building of the row intact, featuring Neo-Grec with Queen Anne style elements which differ from the other buildings on the block. It is because of this integrity that HDC is concerned with this application. The proposed rear-yard addition is extremely bulky and overwhelming to this rowhouse and the houses on the rest of the block. While a rear addition may be appropriate, this one, which nearly doubles the size of the building, is not. HDC recommends rethinking the elevator, as this building is already the tallest one on the block and the proposed rooftop bulkhead, which is 16 feet high, will add considerable height and overwhelm its neighbors. Perhaps a hydraulic elevator would lessen the visual impact by putting the mechanicals in the basement. HDC looks forward to seeing a revised proposal with visibility studies included, as they were not included with this application. 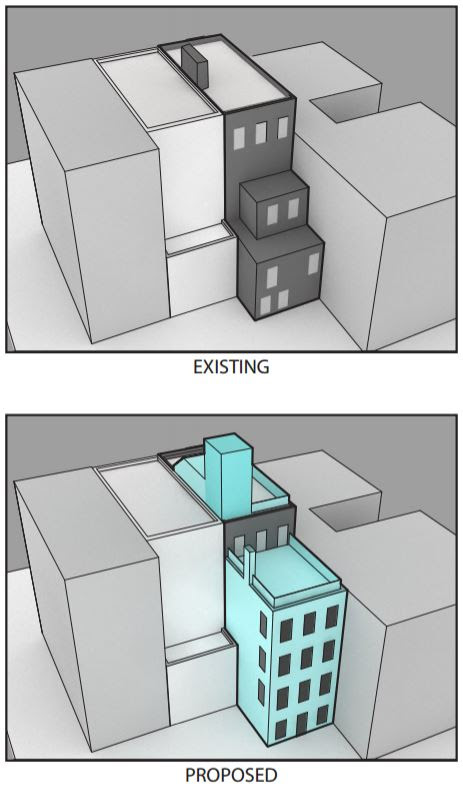 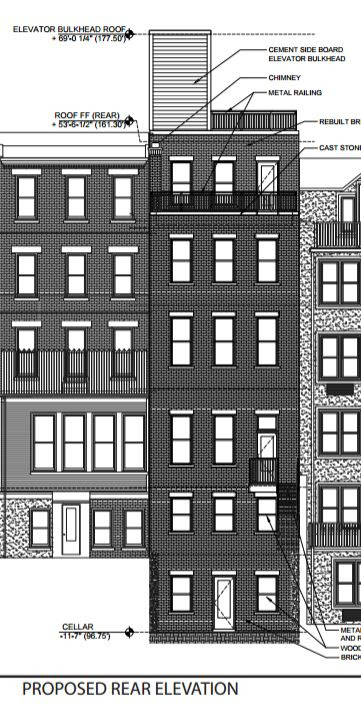 An Itallianate style rowhouse designed by W. O’Gorman and built in 1871. Application is to remove a bay window at the rear façade and construct a rear yard addition.

This building is the last survivor of a row of 1871 houses, all of which had decorative bay windows in the rear. Destroying this fine architectural feature and replacing it with a poorly-considered aluminum green house is an affront to this historic building. If an addition is desired, HDC urges the applicant to design one that incorporates the historic bay into its design. 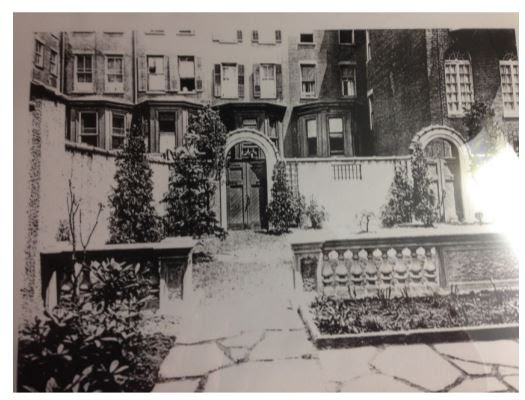 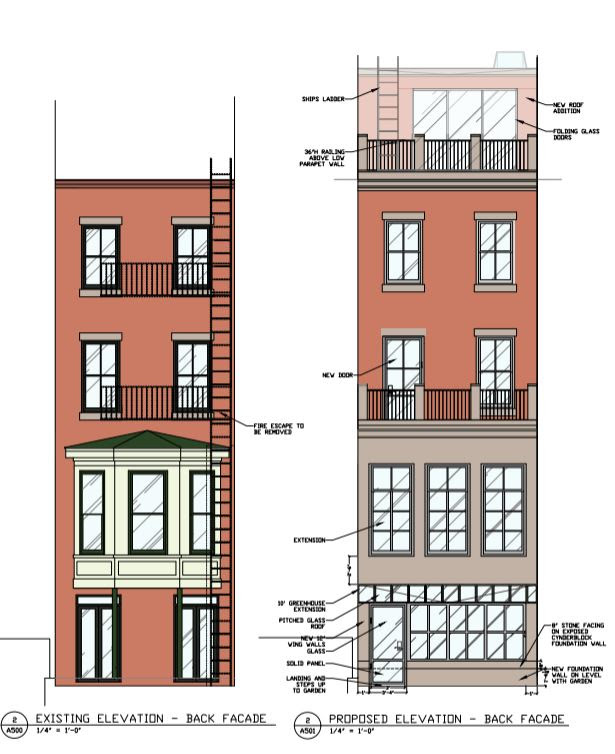 A Queen Anne and Romanesque Revival style rowhouse designed by Edward L. Angell and built in 1890. Application is to alter the rear façade, construct a rooftop bulkhead, and install mechanical equipment, screens and railings at the roof.

As a corner building, 121 anchors the Manhattan Avenue Historic District and its remarkable roof line is an  intentional statement of architect Edward Angell. The proposed screens, railings and bulkhead at the roof detract from this design. HDC recommends less visible railings and lowering the bulkhead to minimize the impact of this lovely but very small historic district. 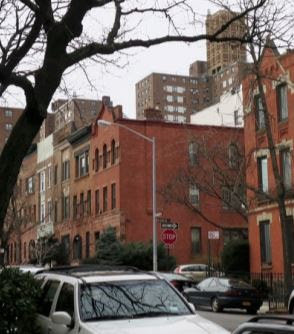 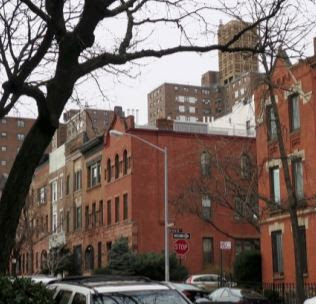 Item 9
36 Riverside Drive – West End Collegiate Historic District
CERTIFICATE OF APPROPRIATENESS, Docket #194171
A Romanesque/Renaissance Revival style rowhouse designed by Lamb & Rich and built in 1888-1889 with early to mid 20th century alterations. Application is to modify the front façade and areaway, and construct rooftop and rear yard additions.
36 Riverside Drive is one of two surviving buildings which were once part of a four building wide townhouse configuration. The building is wedged between massive apartment buildings and is a prominent anomaly on this street. While this property has been highly altered, moving farther away from its original stylistic appearance will detract from the building’s historic character.  As an example of the Romanesque/Renaissance Revival style, HDC does not find the expanse of glass windows at the third story appropriate. Rounded-arch windows are a primary characteristic of Romanesque architecture and HDC urges that these features be incorporated on this story. Further, the lack of masonry divisions in the glazing moves away from the heavy ashlar which typifies this style. On the parlor floor level, the applicant is attempting to harmonize the openings and make this façade symmetrical. This is problematic because the building itself was never symmetrical, but rather was symmetrical to other buildings which are no longer extant. The original façade and stonework, including scrolls, the shell and the bay are all intact, but obscured behind glass. HDC would like to see the original façade exposed again, as opposed to discarding it, which is tantamount to significant loss of historic fabric. Revealing the original facade would move the building even further in the right direction, in terms of historic preservation. Several houses in this historic district have stoops that have been removed and had ground floors harmonized, and HDC is confident it could be achieved here as well.
Regarding the rear addition, we recommend reducing it by one story as the current proposed addition is 26 feet tall and overwhelming in size. A size reduction would reduce the visibility of the rooftop addition and railings, which are highly visible from Riverside Park and detract from the dormered and ornamented roofline.