The Historic Districts Council is pleased to support the properties at 236 & 238 President Street in Brooklyn for consideration as individual New York City landmarks. The smaller building at 236 President Street was built in 1897 by Hough & Duell for use as a kindergarten. It was the first kindergarten in the area and later housed the first Spanish-speaking parish in Brooklyn, serving the First Methodist Episcopal congregation. In addition to its history, the building is a quite unusual structure architecturally. A modest 2 story building, it is designed in an exuberant Louis XV fashion. The richly ornamented façade is composed of buff brick and stone, with an elaborate stone entryway; window surrounds & keystones; quoins; and a pedimented entry surmounted by a lavishly executed acroterion. As an additional treat, the buildings’ artful gates and ironwork remain extant, and match the haute-style of the buildings. This building does not have an equal in New York City, making it truly one-of-a-kind. Despite an unsympathetic 20th century garage alteration, the building’s design and massing are clearly legible and this incursion does not detract or mar the architectural details of the facade, all of which are completely intact.

Together with its equally charming neighbor, an 1853 Italianate mansion at 238 President Street, these two buildings share an extensive social history; their lots only being separated in 1974. Earlier this year, 236 President Street was under contract to be bought by a developer who had imminent plans to demolish the building and build a mass that would have substantially changed the character of this Carroll Gardens block. HDC connected with the neighbors on this block in February 2018 and assisted them in their efforts to save this beloved edifice. This group conducted extensive research and submitted an impressive Request for Evaluation. Thanks to the LPC, these buildings will continue to share their past and now have a long future ahead of them.

We are thrilled with the swift action the LPC took to protect these buildings, and we urge the Commission to designate these buildings as soon as possible. 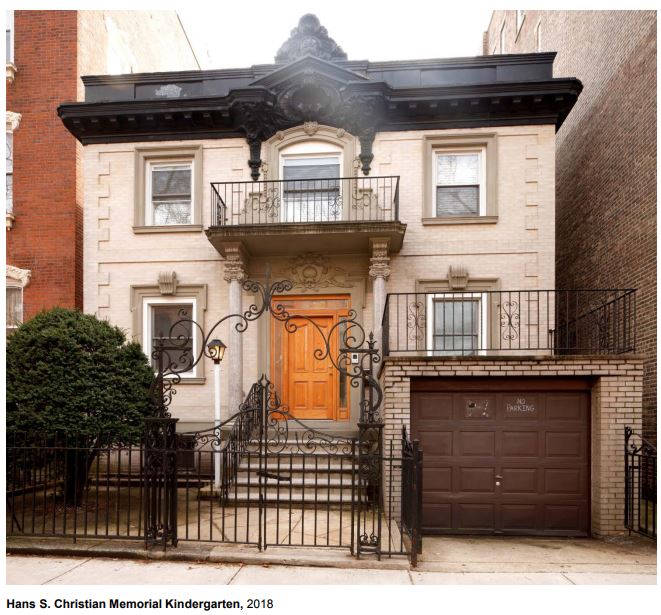 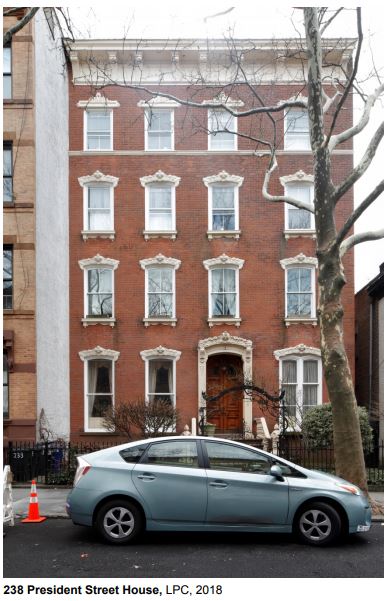 An Italianate style rowhouse built c. 1873. Application is to legalize the replacement of windows, and alterations to the parlor floor entrance and façade without Landmarks Preservation Commission permit(s).

While these illegal replacement windows are not worse than what was here at the time of designation, HDC would like to advocate for a more restorative approach with the replacement of arch-top windows, which were originally found here. Similarly, the straightening of the arched transom on the door represents the loss of a historic and contributing feature to this house and the row. In historic districts, we have the opportunity to move historic buildings in a better direction, and we ask the LPC to uphold a higher standard here. 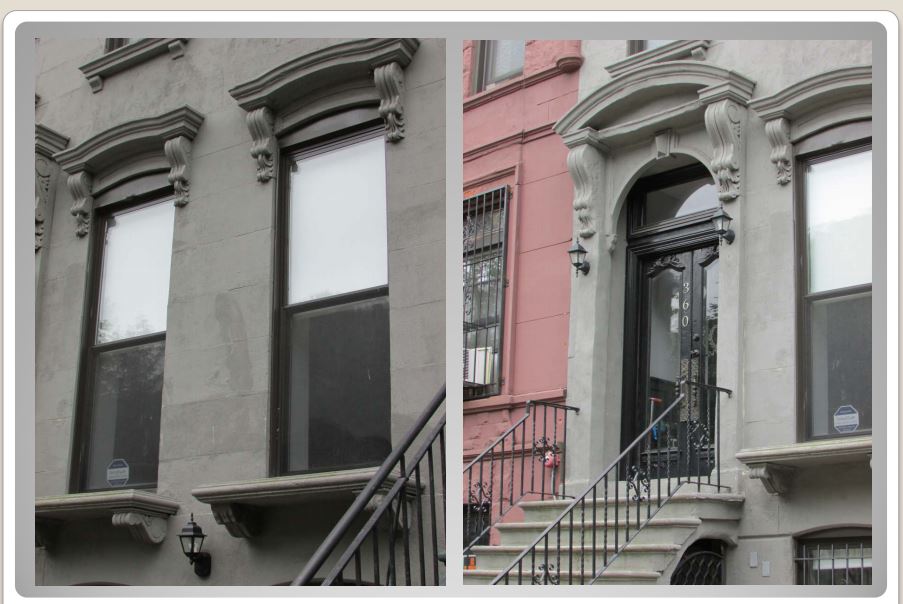 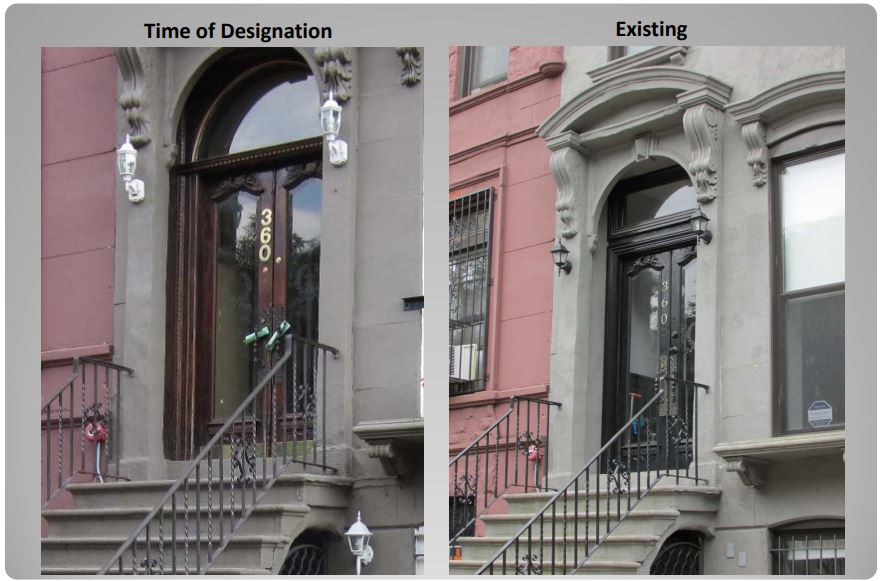 A Greek Revival style house built in 1845-46. Application is to install a dormer, construct a rear yard addition, enlarge masonry openings, and excavate the rear yard.

This house has unfortunately been unoccupied for a long time, and while we do not know the specific circumstances of its ownership and plans for its future occupation, we do observe some serious shortcomings in the approach to its renovation. First of all, the application is incomplete due to the lack of any historic photographs, which is indicative of the lack of attention paid to the historic character of the house and its context within one of the most intact 19th century neighborhoods in the city. The rear yard addition’s bulk and design is completely inconsistent with the neighborhood and with the LPC’s own standards. At the very least, the top two floors should be left unchanged to keep the memory of its punched openings, and the proposed ironwork should be closely modeled on historic photographs of this house and/or others in the row. Overall, we ask that the applicant be required to do further study to inform any work on this very historic house. 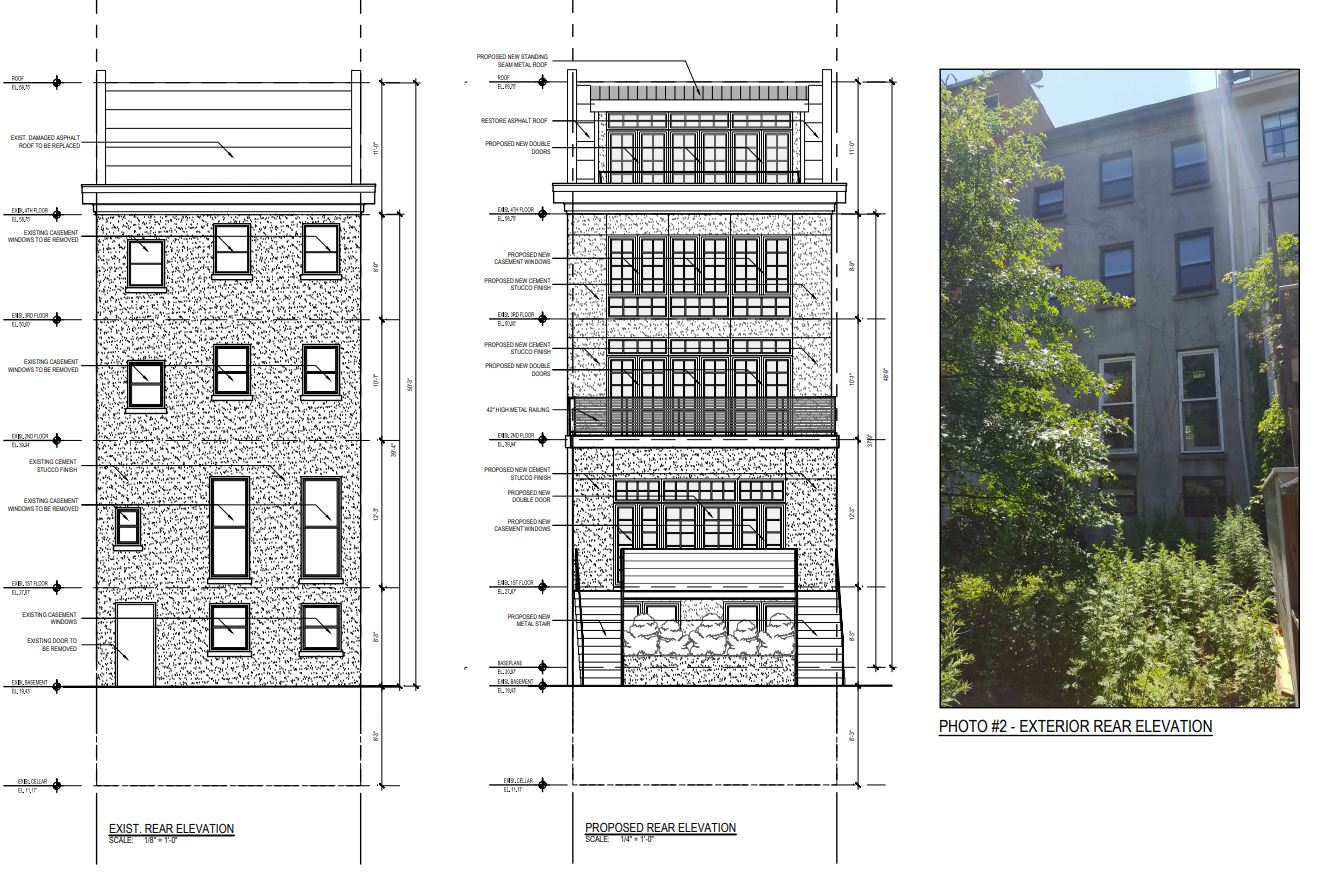 While HDC does not object to the added bulk in the rear, which is quite modest, we do wish to state that a far better approach would be to remove the existing apartment building-style addition in the rear, which is very visible and distracting from the public way, and re-work the bulk to create a more appealing rear ensemble and return the building to a more traditional profile. 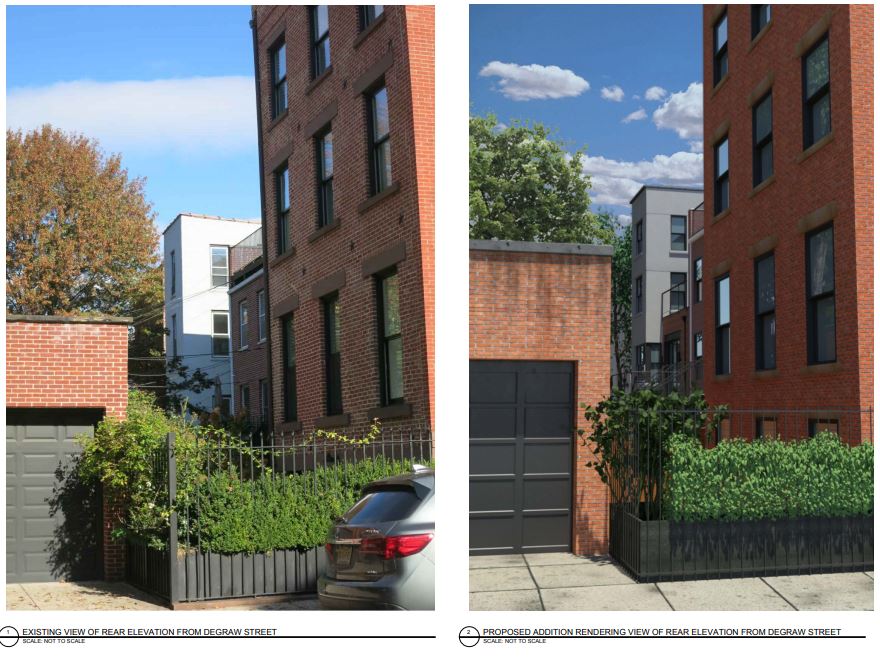 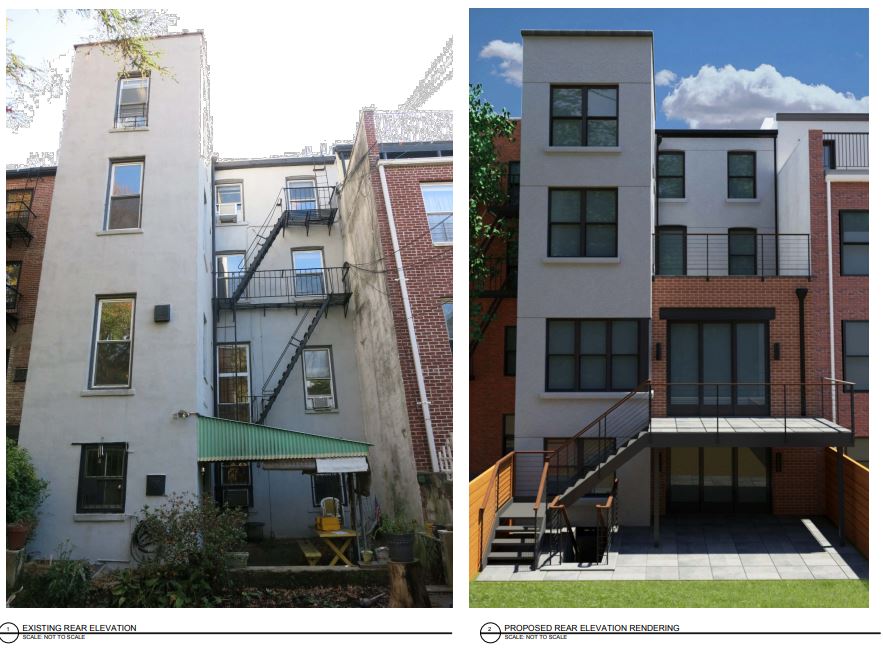 A neo-Italian Renaissance style residence designed by Albert Joseph Bodker, built in 1910- 11, and altered in 1929. Application is to replace windows.

Given this building’s high style, prominent location, and existence of original wood windows, HDC finds no reason that off-the-shelf aluminum windows and unacceptable brick molds be approved. We ask that wood windows be required and that the brick molds be restored. 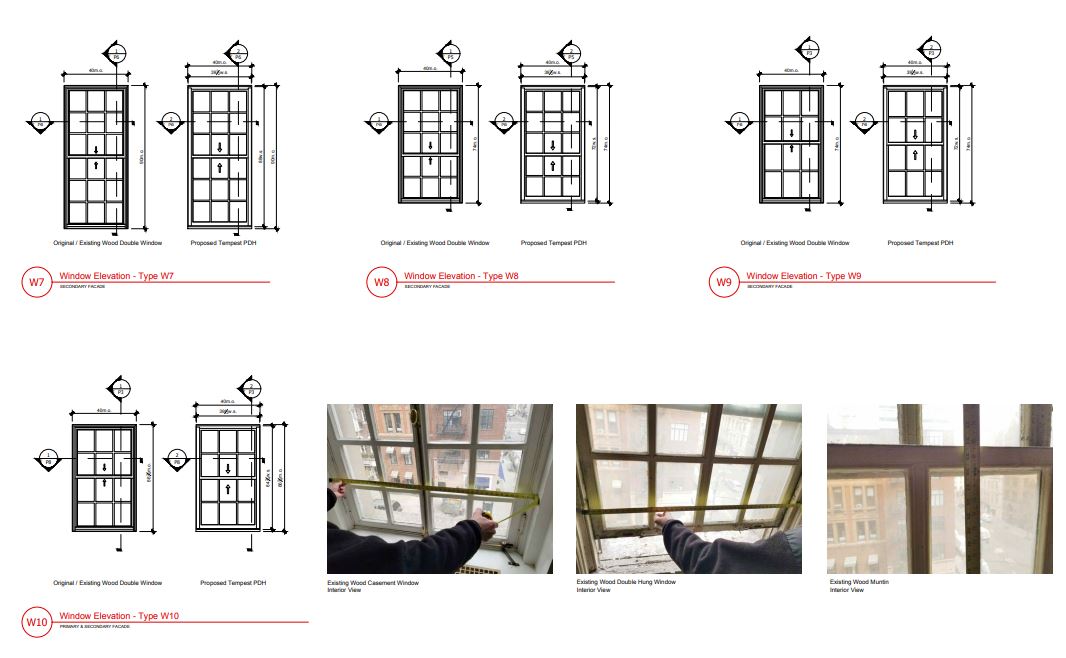 A neo-Gothic style commercial building designed by Helmle and Corbett and built in 1916-18. Application is to replace storefront infill, doors and awnings.

Given the very thoughtful treatment of the 42nd Street storefront proposed by this firm and approved by the Commission, we were a bit disappointed to see a rather dull approach proposed for this building’s 41st Street storefront. HDC’s Public Review Committee finds that a more finessed plan that still solves the tricky egress issues could certainly be achieved by this capable firm, so we ask that more study be undertaken here. 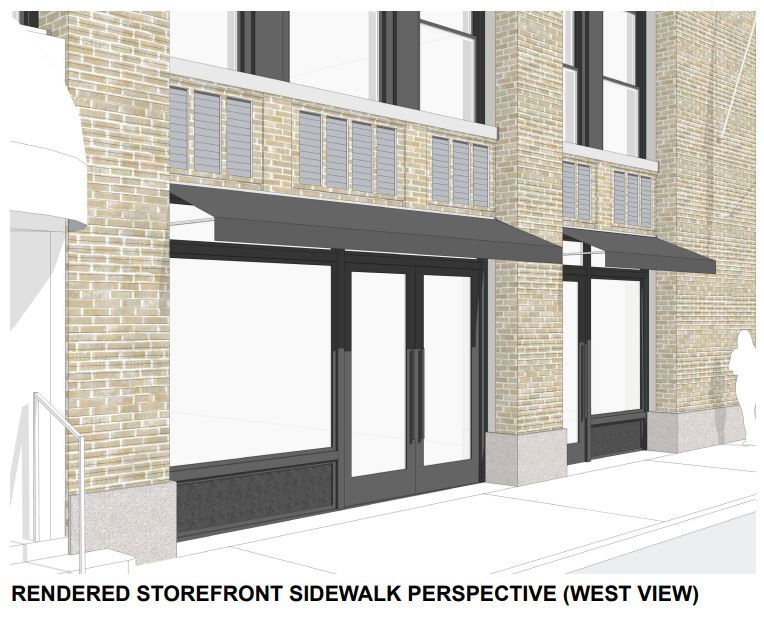 An Italianate/neo-Grec style store and loft building designed by Henry Englebert and built in 1867-1868. Application is to install an entrance and to legalize modifications to a loading platform in non-compliance with Certificate of Appropriateness 18-2611.

HDC finds that extending the loading platform across another bay of the front façade would unnecessarily obscure more architectural detail, so would prefer the previously approved scheme. 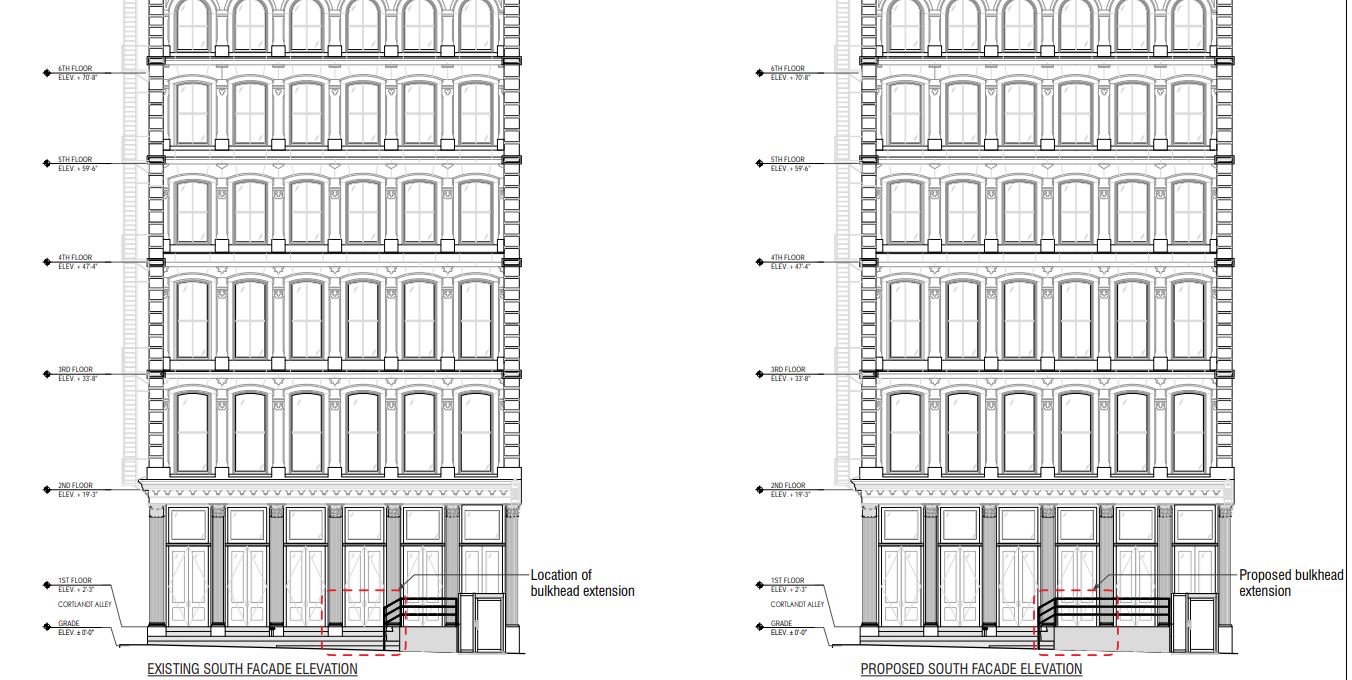 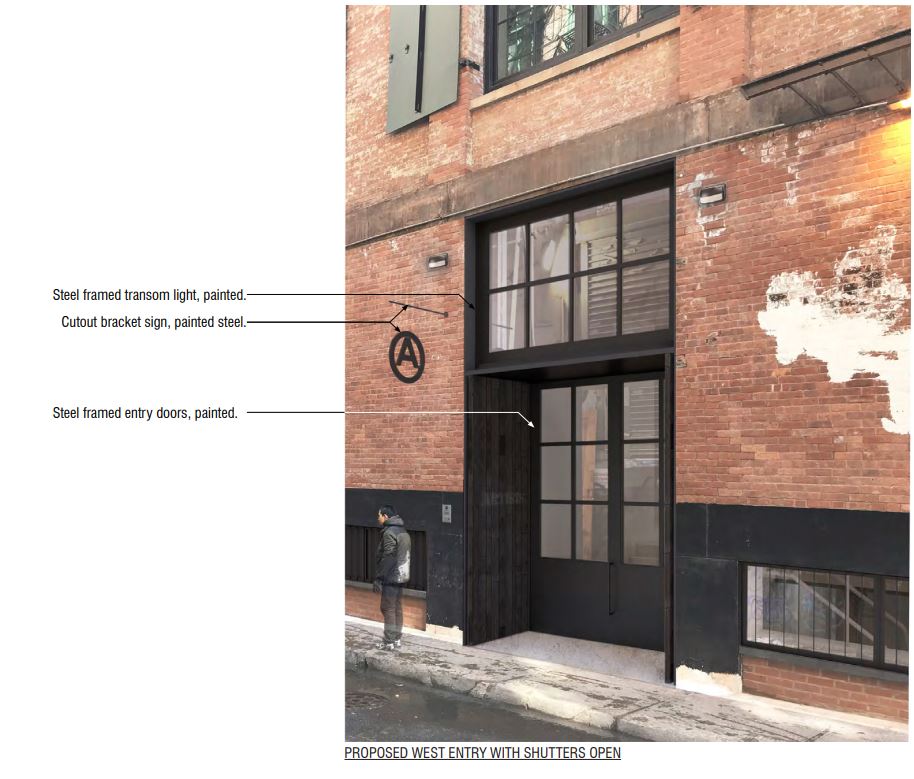 Following up on our testimony from the May 29, 2018, hearing, HDC wishes to comment on the revised application. We are glad to see that the applicant responded to our and many others’ statements about deepening the shelf above the north garden wall to allow for plantings to honor Russell Page’s original intention. However, we wonder if two feet is sufficient for trees to grow in this space, and feel that the rear addition still crowds the garden wall too much. Concerning the additions, the revised plan does not address many comments made by the public and by Commissioner Devonshire during the Public Hearing about investigating ways to lessen the amount of visible bulk, and we question why the applicant has not addressed this issue. Lastly, this application has shed light on the vulnerability of the Frick Collection’s historic and much beloved interiors, and we wish to support the efforts of preservation groups who are calling for the designation of some of these spaces, including the threatened Music Room. 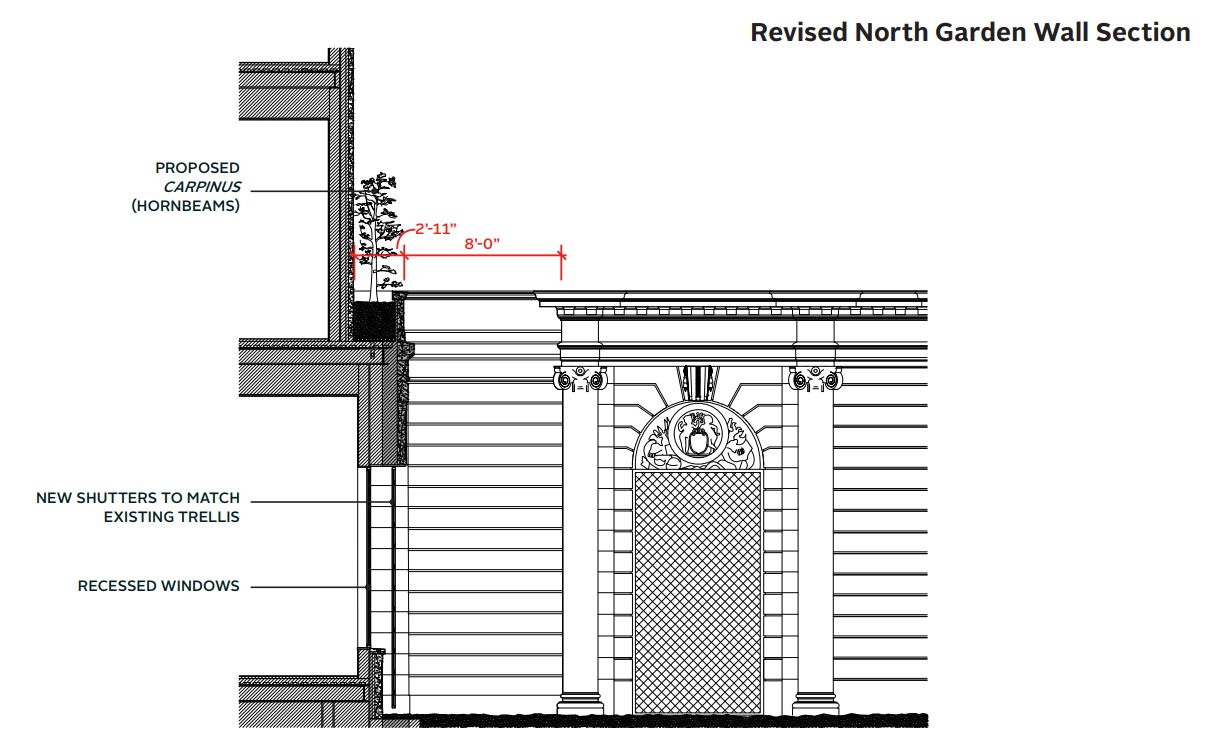 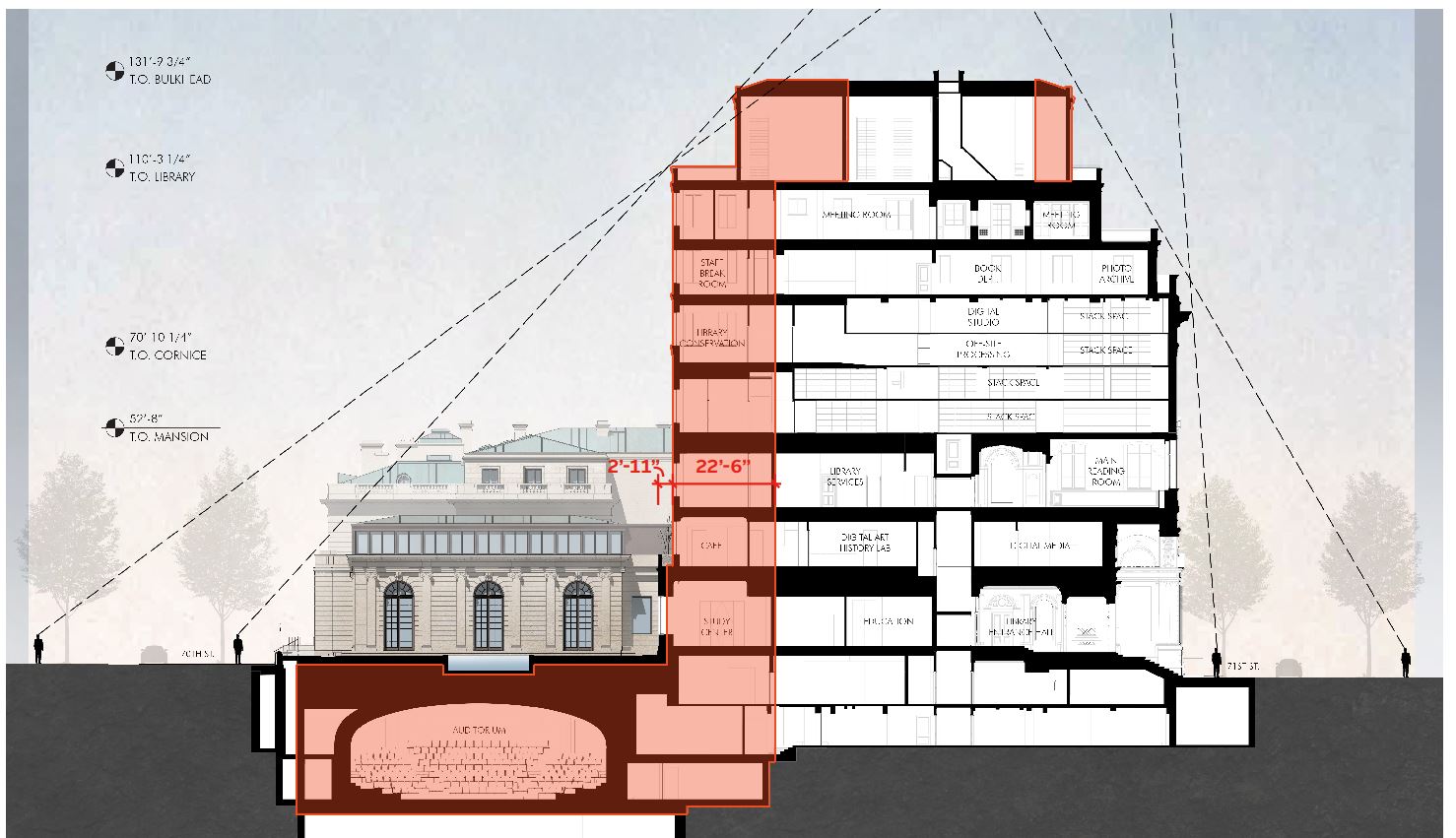