LPC-22-08797
35-14 88th Street – Jackson Heights Historic District
CERTIFICATE OF APPROPRIATENESS
An Anglo-American Garden style rowhouse designed by C.L. Varrone and built in 1925. Application is to legalize the replacement of windows and installation of bay windows without Landmarks Preservation Commission permit(s)
HDC finds this proposed legalization to be inappropriate. The windows should be wood or wood clad with either true or well-simulated divided lights. The oriel window is also inappropriate in its current form, due to its poor quality of detail. One can imagine that there may be an elegant and appropriate way of incorporating an oriel into this façade and had the applicant followed the rules and worked with LPC staff on this, it may well have been found. In this case however, we ask the Commission to reject this legalization. 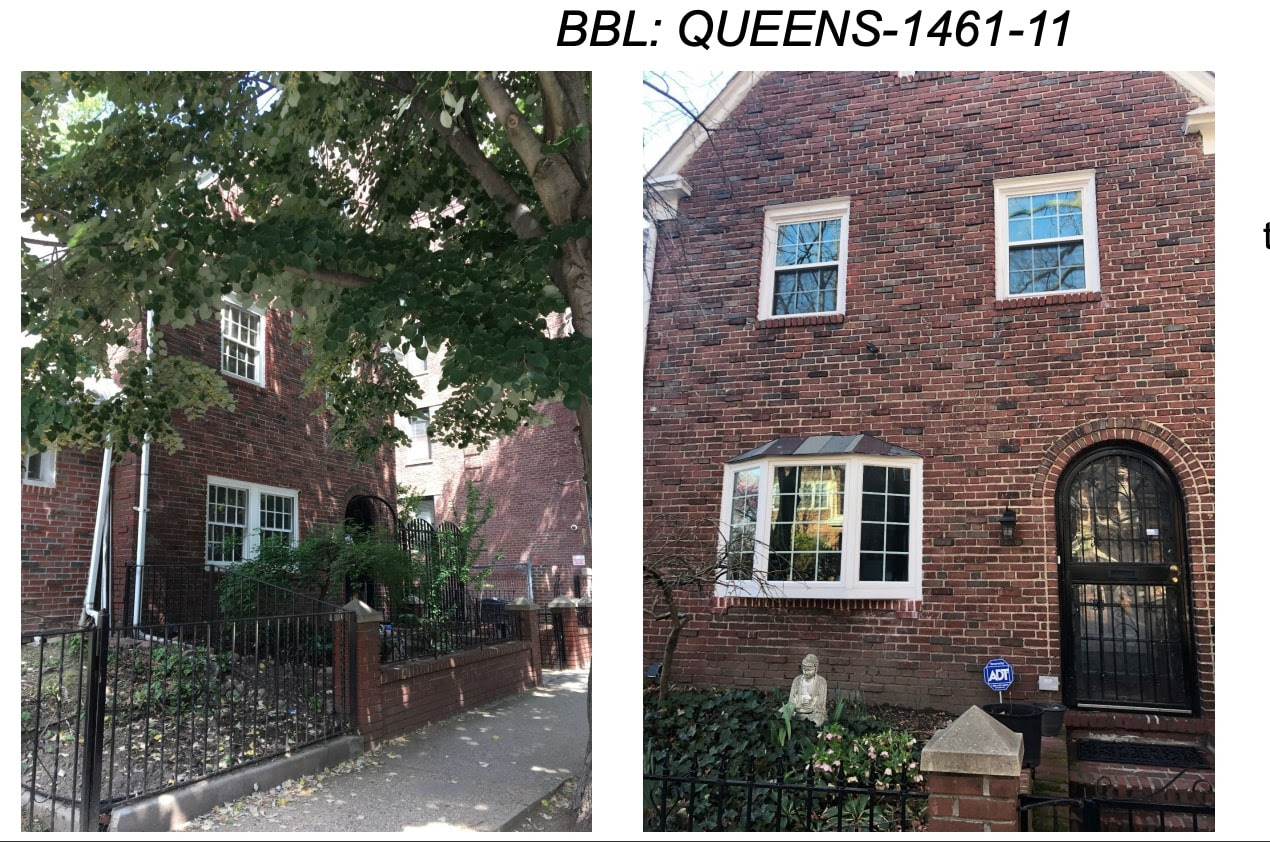 LPC-22-11536
66 Greene Avenue – Fort Greene Historic District
CERTIFICATE OF APPROPRIATENESS
An Italianate style rowhouse built c. 1868. Application is to construct a rear yard addition.
Architect: Easton Architects
HDC finds this presentation to be insufficient to render an opinion. We think that the general idea for this two story addition and its proposed façade is headed in the right direction in terms of bulk architectural expression, but we find that the elevation renderings and sections are not coordinated and are lacking in sufficient detail. We ask the Commission to require the applicant to work with staff to develop a more thoroughly resolved solution to this project. 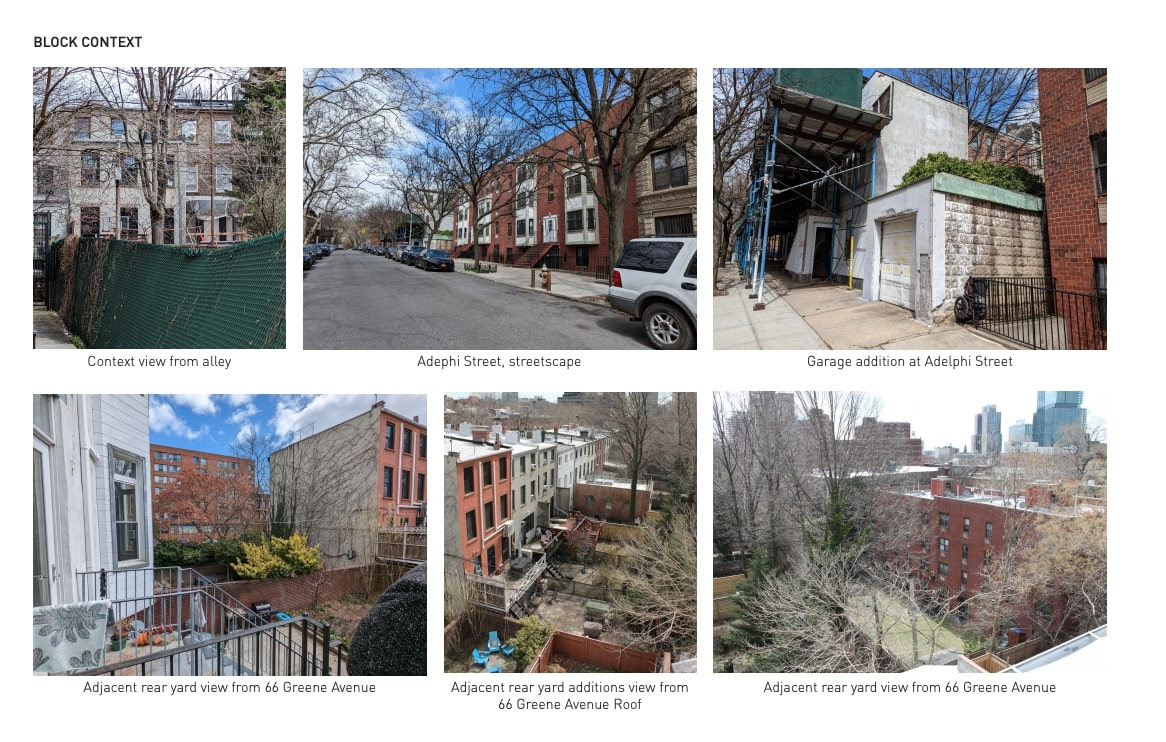 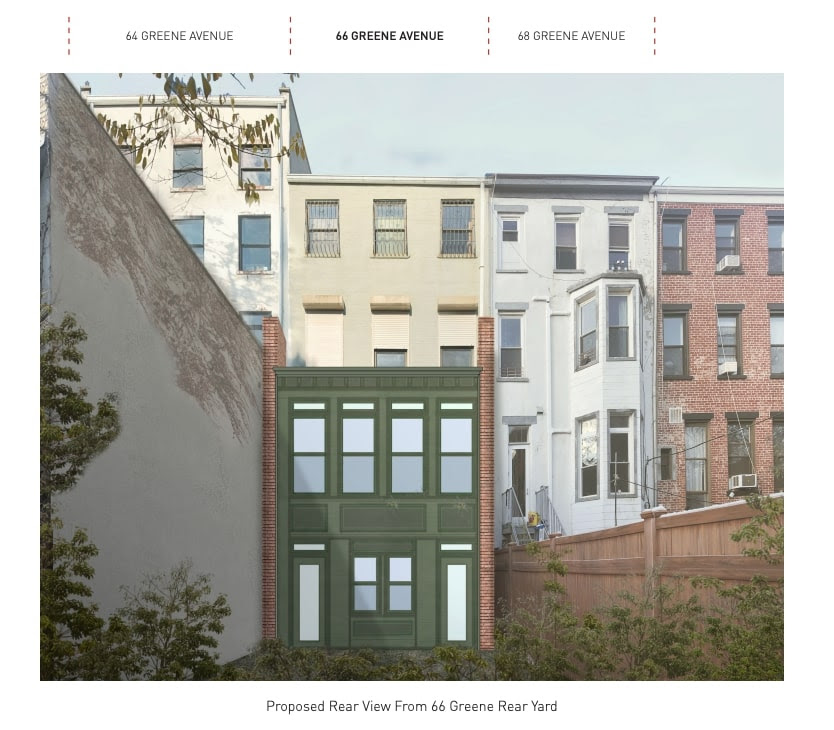 LPC-22-11489
73 Bainbridge Street (aka 427 Lewis Avenue) – Bedford Historic District
CERTIFICATE OF APPROPRIATENESS
A rowhouse designed by Magnus Dahlander and built in 1892. Application is to legalize the removal of the turret without Landmarks Preservation Commission permit(s) and install garage doors.
This is an exceptionally lovely building by a well-known architect that should be restored to its original condition as much as is possible. The corner turret is an important architectural feature and it is meant to mark the end of the row. The turret should be restored and the structural, masonry and flashing work should all be undertaken to correctly rebuild this feature.
The garage façade and its doors should also be restored to their original configuration. The tax photo clearly shows the correct door shapes and configuration and it also shows a simple three-part wood cornice that should similarly be replicated. It is unfortunate that the previous owner removed it without LPC permission or input and we appreciate that the current owner has been left to deal with it. But, the property’s intrinsic value and its future value should easily support the restoration work required.
We therefore ask the Commission to require this applicant to work with staff to make appropriate renovations to this buildings handsome exterior. 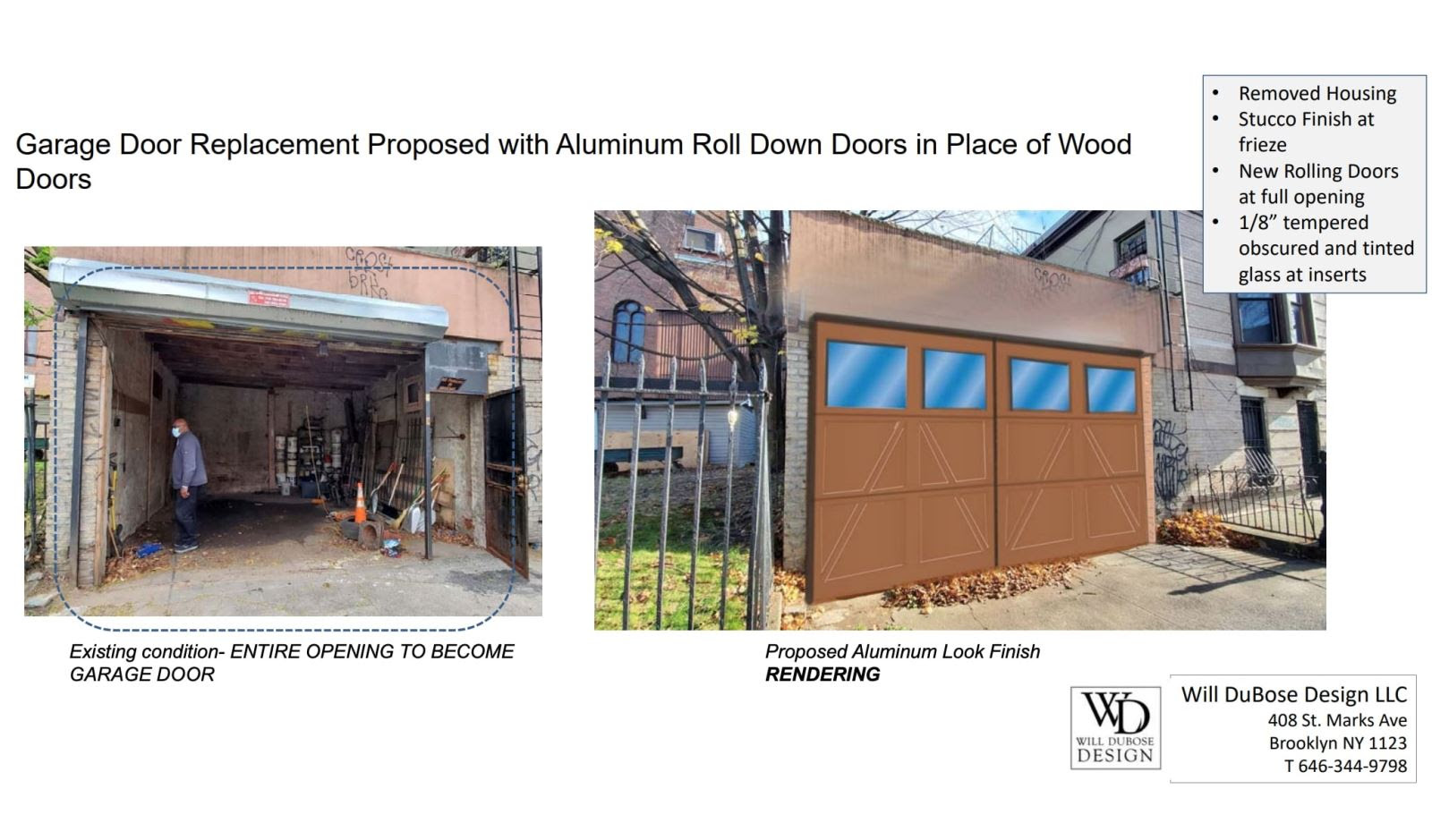 LPC-22-02609
352 East 25th Street – East 25th Street Historic District
CERTIFICATE OF APPROPRIATENESS
A Renaissance Revivalstyle rowhouse designed by Glucroft & Glucroft and built c. 1909- 1912. Application is to replace a door.
The proposed doors are not appropriate for this building and should therefore be rejected. The tax photo and other buildings on the block provide sufficient evidence of what this house’s doors should look like. 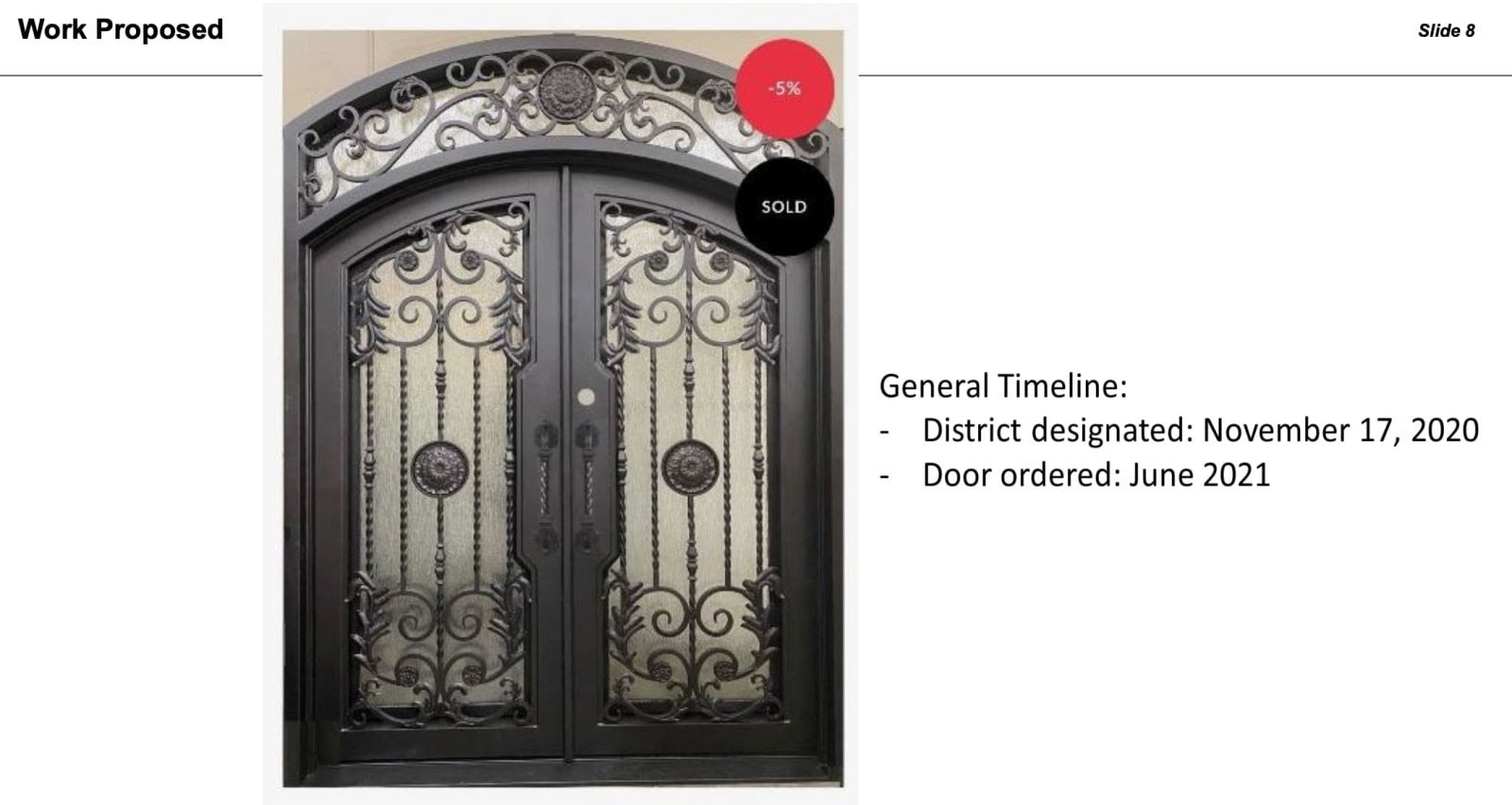 LPC-22-09297
458-460 West 23rd Street – Chelsea Historic District Extension
CERTIFICATE OF APPROPRIATENESS
Two rowhouses built c. 1857 and later altered. Application is to replace windows.
Architect: George Ranalli.
HDC believes that full frame and sash replacement of these windows is the correct way to begin to restore this façade to its original configuration. We would note also that the second-floor window sills should have their sills dropped to align with the neighbor to the east, thus requiring the windows on the floor to be of a 2-over 4 configuration. 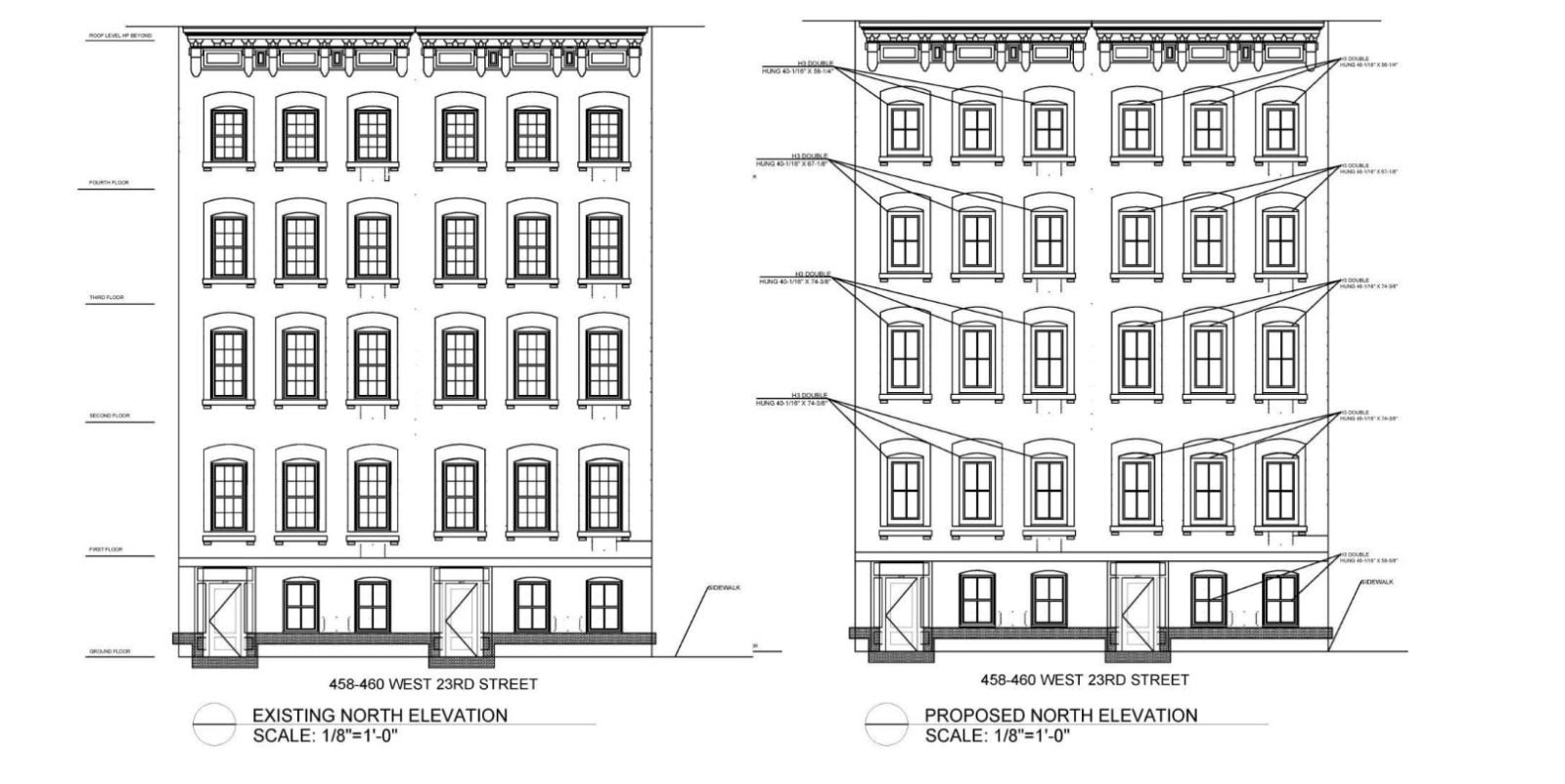