LPC-22-06981
274 Malcolm X Boulevard – Bedford-Stuyvesant/Expanded Stuyvesant Heights Historic District
CERTIFICATE OF APPROPRIATENESS
A store and flats building built c. 1879. Application is to alter and enlarge the building, including replacing the facades.
Architect: ASA BARAK ARCHITECTURE STUDIO, DPC.
HDC finds this proposal to be headed in a generally appropriate direction, but we would ask LPC to continue to work with the applicant to study and develop the following items:
– We would like to encourage the applicant to use aluminum clad wood windows and we believe the detailing on that product is of better quality.
– Fiberglass cornice should be pitched back toward the roof, to keep water off of the façade and prevent icy sidewalks.
– Carefully study precast stone proportions and detailing.
– Study and develop front door enframement and make it more substantial and befitting the entry to a medium sized apartment building
– Secondary and tertiary facades should be brick as they are very visible from Macon St. 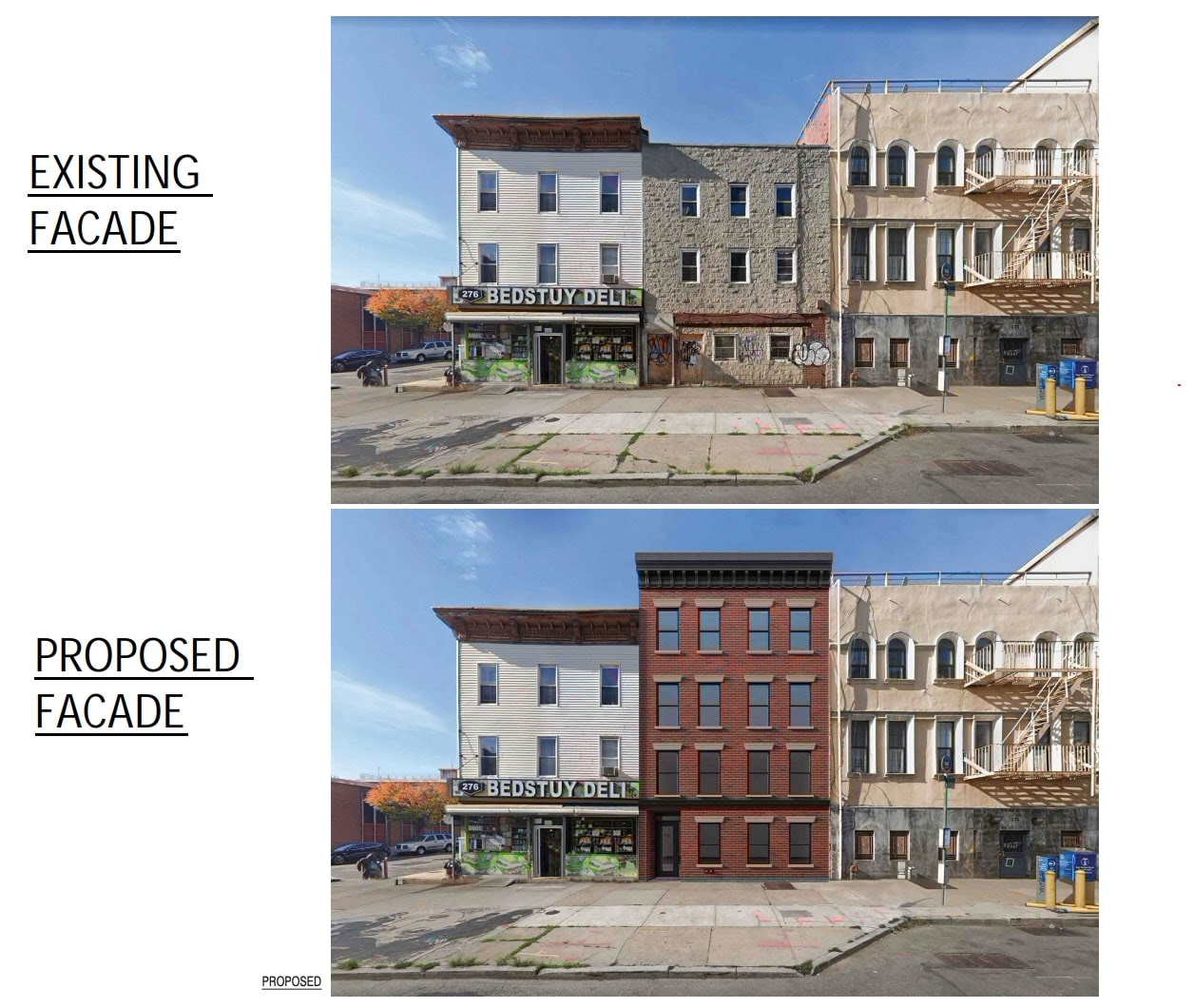 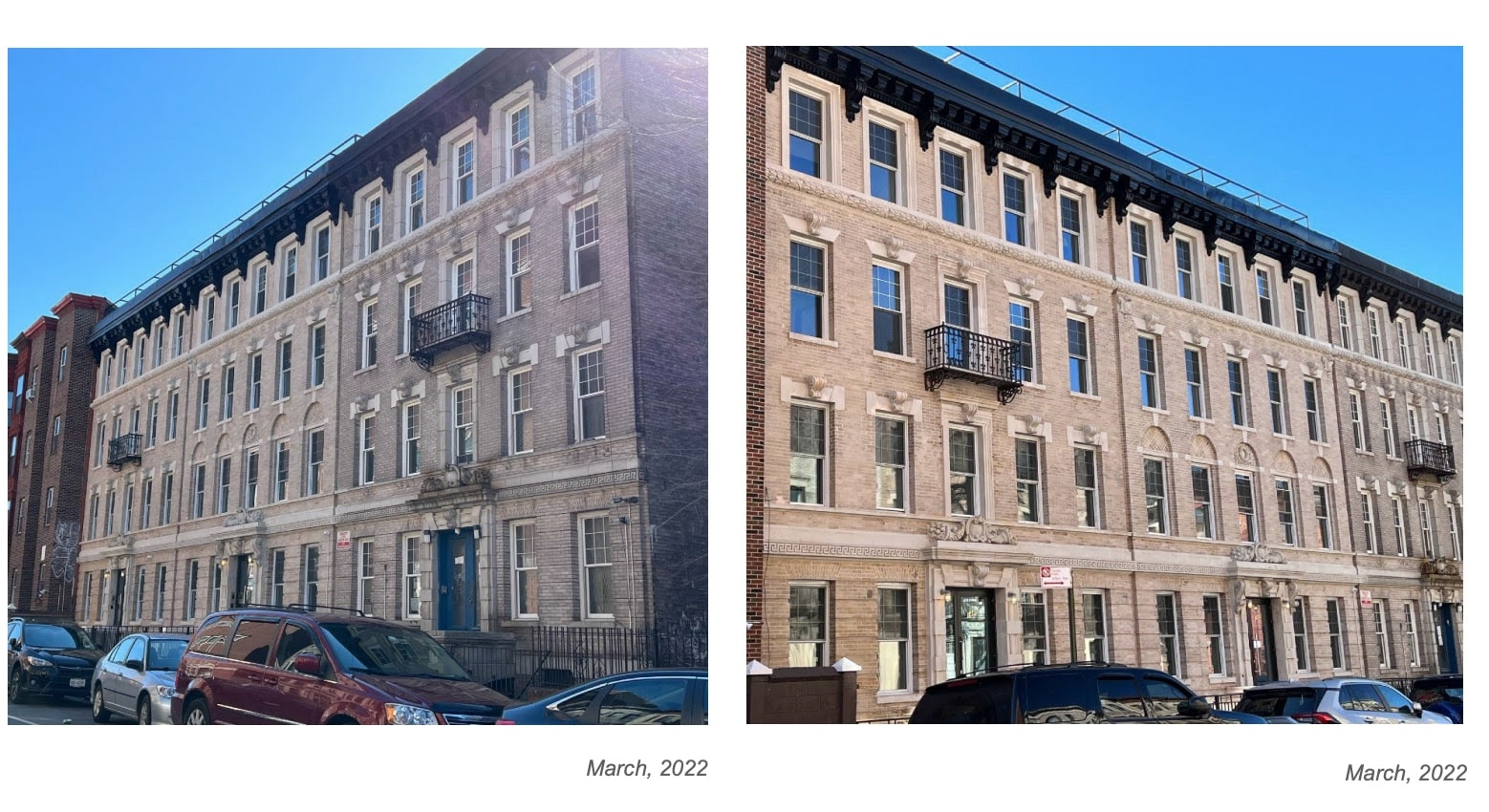 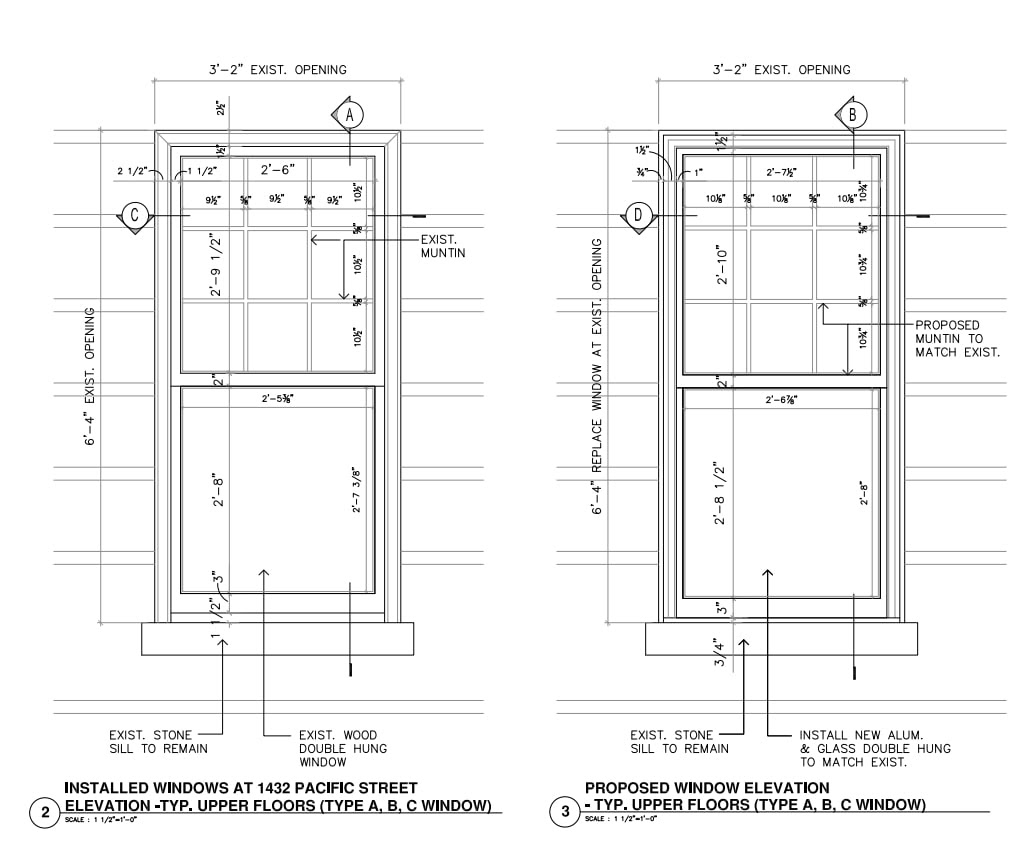 LPC-22-08416
1125 Grand Concourse – Andrew Freedman Home – Grand Concourse Historic District
CERTIFICATE OF APPROPRIATENESS
An Italian Renaissance style institutional building designed Joseph H. Freedlander and Harry Allan Jacobs and built in 1922-24 with additions designed by David Levy and built in 1928-31. Application is to install lighting and signage, and construct barrier-free access ramps.
Architect: Marvel
While HDC is generally supportive of this application we have a question and a request:
Is shining lights onto the façade and therefore into the windows of the building going to be appreciated by the residents?
We are unclear on the visibility of the ADA ramp from the public thorough fare and wonder why the applicant included images of the very handsome and sophisticated ADA access ramp at St Patrick’s Cathedral but then chose to design something that looks temporary and overly metallic. We would ask the Commission to require a more elegant and integrated ramp for this beautiful building. LPC-22-09131
176-178 Waverly Place – Greenwich Village Historic District
CERTIFICATE OF APPROPRIATENESS
A pair of Greek Revival style houses built in 1839. Application is to construct a rooftop addition, replace front doors, excavate the cellar and rear yard, and alter the rear façade.
Architect: SUK
HDC finds this application to be inappropriate.
The proposed bulk is awkward and is clearly an insensitive attempt at maximizing FAR rather that designing a handsome buildings. The rear façade fenestration and materiality is grotesque and looks more appropriate for a Capital One Bank branch. Finally the applicant has not preserved the top floor and corbelled brick cornice on the buildings rear facades.
Interestingly, the the application for Bank Street is proposing a similarly sized home, however they have done much more to maintain the buildings scale and materiality and generally played by the rules. Perhaps this applicant should stick around for their presentation and discussion.

LPC-22-04647
105-107 Bank Street – Greenwich Village Historic District
CERTIFICATE OF APPROPRIATENESS
A Greek Revival style rowhouse built in 1846, and a Greek Revival Style rowhouse built in 1846 and later altered. Application is to combine the buildings, construct rooftop and rear yard additions, alter facades, areaways and the party wall, and excavate the cellars and rear yards.
Architect: ROBERT A.M. STERN ARCHITECTS
HDC finds this application to be generally appropriate, and a good example of how one can combine rowhouses. We do have two concerns:
We find the displacement of the rear yard bulk to be a bit too random and a bit oversized, and we also note that the applicant has not retained the top floors of the two rowhouses or their corbelled cornices. We recognize that there may be structural reasons for this but believe that the applicant could continue to manipulate these forms into a somewhat more modest and simple form.
We also find the roof top addition to be too big and too visible. We would therefore ask LPC to work with the applicant to affect some modest edits and revisions to this otherwise sensitive scheme. 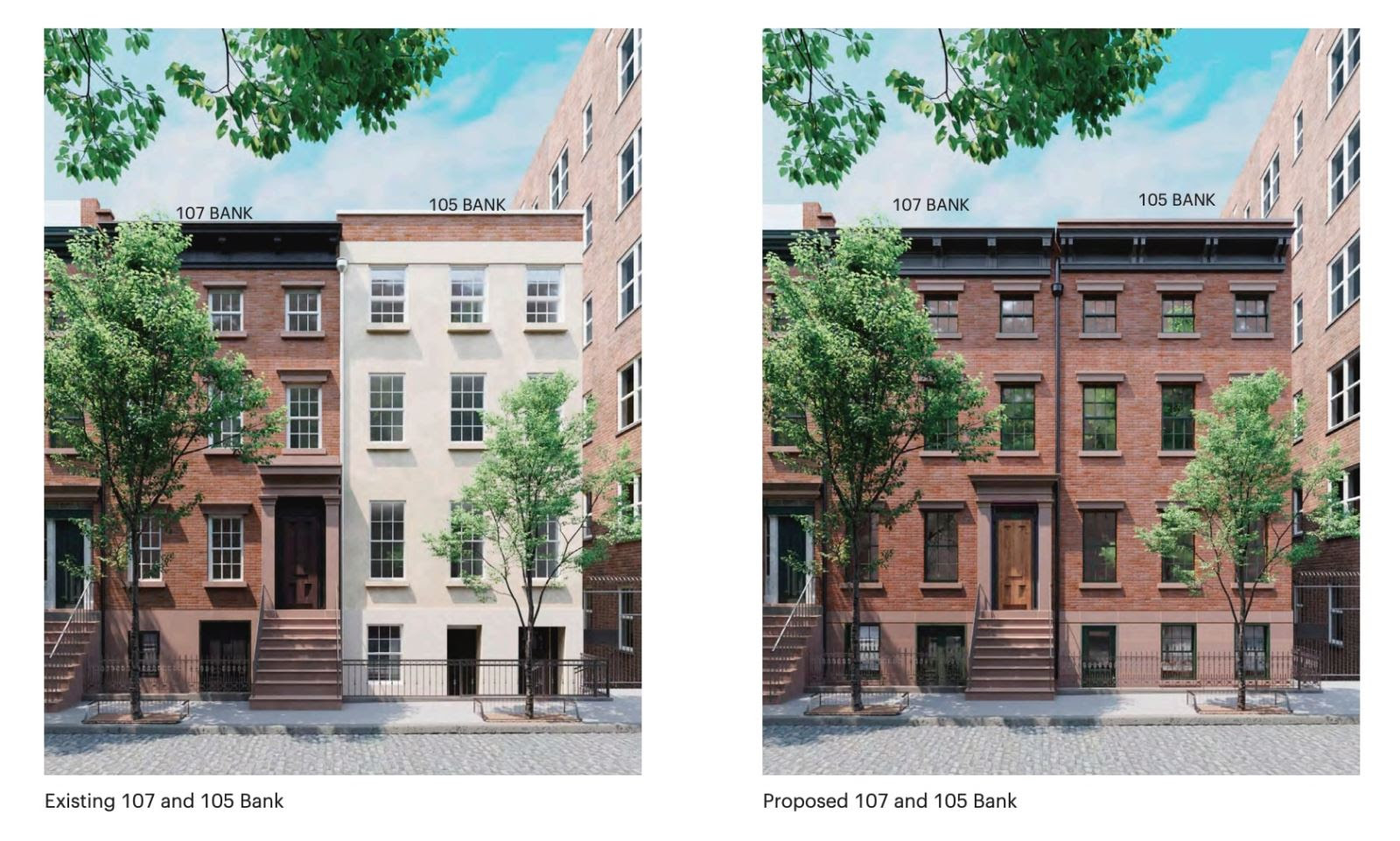 HDC believes that the applicant should be using terra cotta to replace damaged terracotta, and limestone to replace damaged limestone. We would note that the cast stone product proposed will age and weather on a completely different way than the terra cotta and stone it is replacing. This will result in a façade that looks like a hodge podge rather that a coherent thoroughly and thoughtfully designed apartment building. 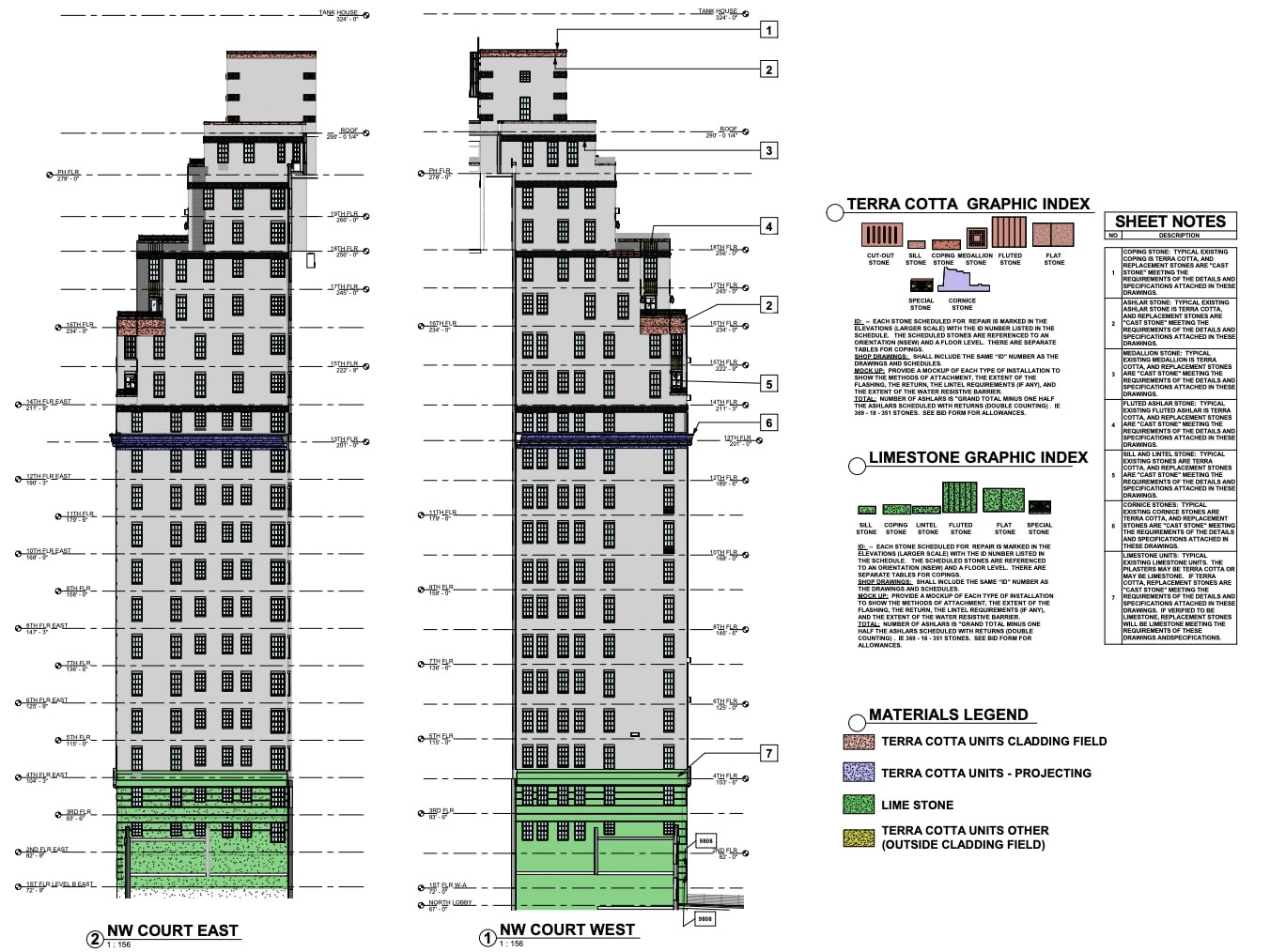 LPC-22-07090
225 West 99th Street – St. Michael’s Episcopal Church – Individual Landmark
CERTIFICATE OF APPROPRIATENESS
A complex of three Romanesque Revival style ecclesiastical buildings combined with other stylistic motifs, including a Church designed by Robert W. Gibson and built in 1890-91; a Parish House designed by F. Carles Merry built in 1896-97, and completed by Robert W. Gibson in 1901; and a Rectory designed by Robert W. Gibson and built in 1912-13. Application is to alter entrances, install a canopy, construct barrier-free access ramps, and enclose an interior courtyard.
HDC is generally supportive of this application. We would like to see the proposed new retaining walls constructed using the same stone as the existing walls. LPC-22-07678
18 East 74th Street – Upper East Side Historic District
CERTIFICATE OF APPROPRIATENESS
A rowhouse built c. 1871 and altered in the neo-Italian Renaissance style by A. Wallace McCrea in 1921. Application is to construct rooftop and rear yard additions and excavate the rear yard.
HDC finds this application difficult to evaluate given the lack of photographs and drawings of the building’s context. That said, we find the rear façade in particular to be out of scale and materially too different from its rowhouse neighbors. We recognize that the building was previously altered in a host of unfortunate and insensitive ways and so we wonder if it is not possible given the extensiveness of the renovation for the applicant to do something to help bring the scale and detailing of this project into greater harmony with its neighbors.
We would ask LPC to work with the applicant to refine the rear elevation and perhaps study ways of making the top two floors of the front façade more cleverly incorporated into the renovation. 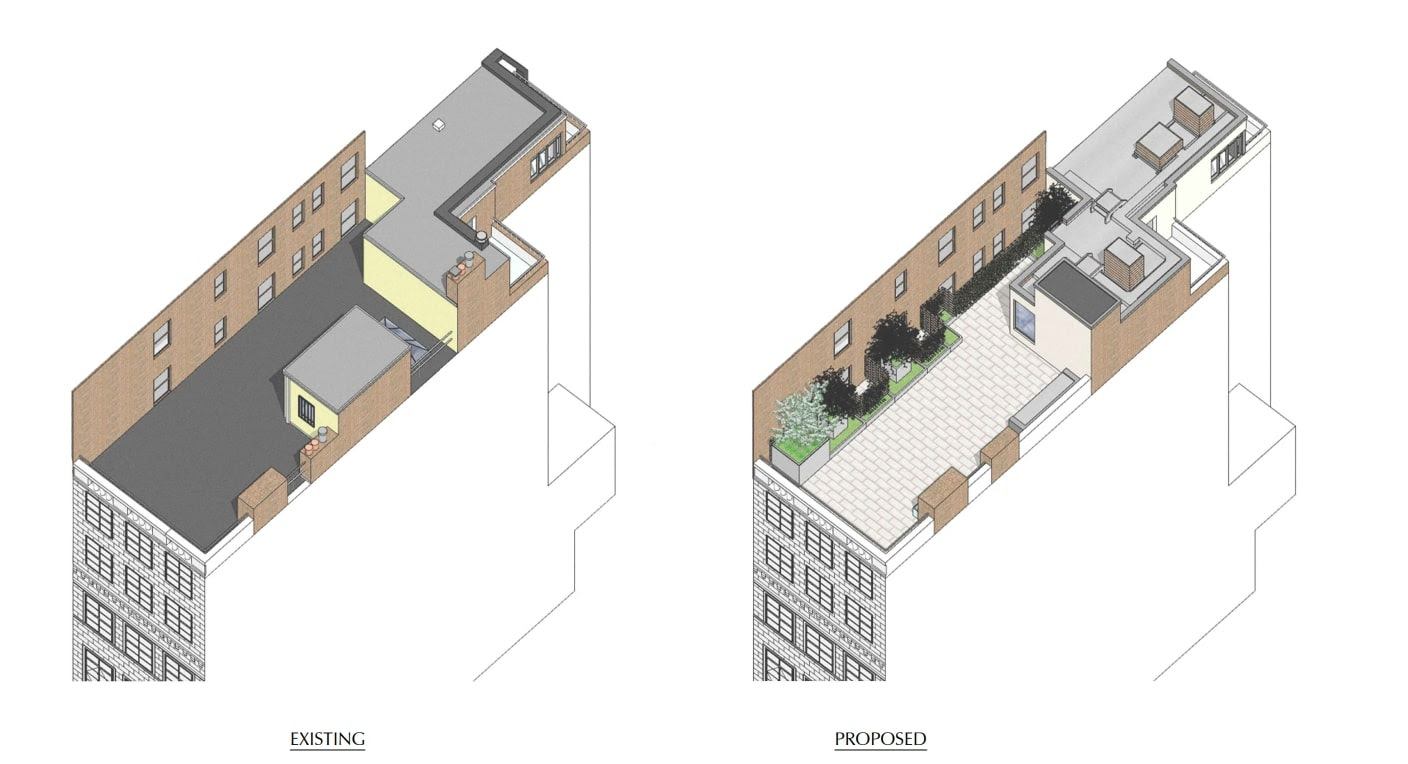