LPC-22-11440
9 Willow Place – Brooklyn Heights Historic District
CERTIFICATE OF APPROPRIATENESS
An Anglo-Italianate style rowhouse built in 1859. Application is to modify openings and replace windows and doors.
Architect: Baxt/Ingui
HDC finds this proposal to be in need of further study. In particular, we believe the large-format glass sliders are compositionally awkward and suffer from a lack of consistent articulation. While we would not advocate for muntins per se, we would ask LPC staff to work with the applicant to find a more sensitively scaled solution.
Determination: Unanimously approved. 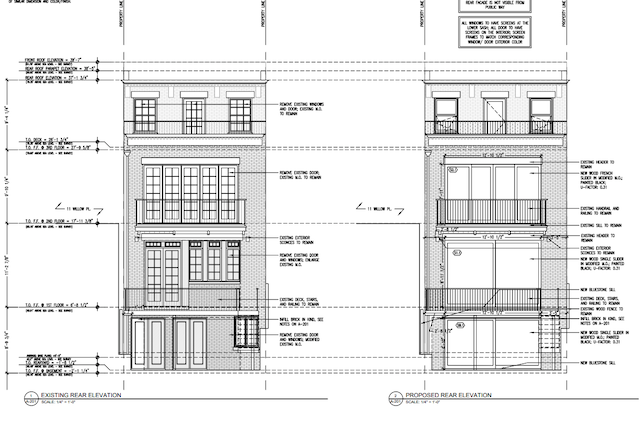 LPC-21-02317
52 Greene Street – SoHo-Cast Iron Historic District
CERTIFICATE OF APPROPRIATENESS
A warehouse building built in 1867. Application is to reconstruct a portion of the facade and construct an addition.
Architect: Costa Architecture and Engineering
HDC appreciates this attempt at a historic reconstruction, but we are concerned that the recreated additional stories will not appear as cohesive as shown in the renderings, because it won’t be possible to exactly match the brick or the mortar joints.
Determination: Unanimously Approved. 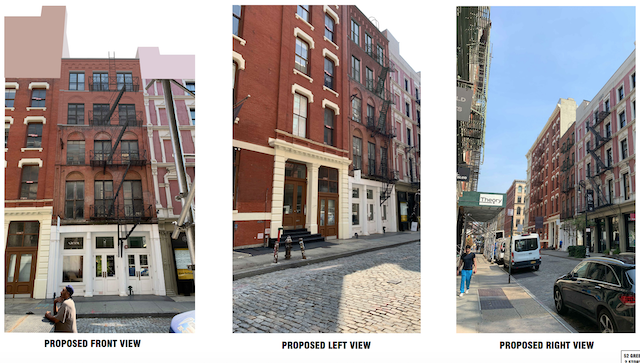 LPC-22-10292
275 Canal Street – SoHo-Cast Iron Historic District Extension
CERTIFICATE OF APPROPRIATENESS
A Queen Anne-style store building built in 1878. Application is to install illuminated signage.
Architecture: Jacqueline Peu-Duvallon
HDC finds the proposed signage inappropriate. It should not interfere with the horizontal line of the storefront cornice. We believe that the signage should fit within the horizontal zone defined by the storefronts transom and that it should not be backlit.
Determination: Unanimously approved with modification to work with staff on placement

LPC-23-02398
25 West 10th Street – Greenwich Village Historic District
CERTIFICATE OF APPROPRIATENESS
A Greek Revival style rowhouse built in 1846-47. Application is to alter the front and rear façades, install windows and doors, construct a rear yard addition, and excavate the rear yard.
Architect: Eric Sheffield
HDC finds this application to be problematic and in need to further study. The proposed alterations to the front facade are inappropriate and should be rejected in full. In particular, the proposed modifications to the front door enframement are arbitrary. They were previously restored to a more appropriate Greek Revival format. The proposed raising of the front cornice is unnecessary. It is also not possible to execute in a visually sufficient way. The applicant will not be able to match the original brick or the original mortar spacing. Therefore, the facade will read as damaged. If the applicant needs extra headroom, perhaps some sort of dormer could be deployed behind the current cornice. The lower three floors of the rear facade should be largely maintained as they are. This facade appears to be a well-composed neo-classical design, and proposed alterations should work with that composition. The alterations to the upper two floors’ masonry openings are appropriate, but the actual windows seem to be mismatched.
Determination: No Action LPC-23-03155
580 Broadway – SoHo-Cast Iron Historic District
CERTIFICATE OF APPROPRIATENESS
A store and loft building designed by Buchman & Deisler and built in 1897. Application is to install a marquee and replace a door.
Architect: PKSB
HDC is largely supportive of this application but notes that the transom above the Crosby Street canopy is not fully resolved and should relate to the adjacent bay of the building.
Determination: Unanimously Approved

LPC-23-03274
768 Fifth Avenue – The Plaza Hotel – Individual and Interior Landmark
ADVISORY REPORT
A French Renaissance style hotel designed by Henry Janeway Hardenbergh and built in 1905- 1907, with an addition designed by Warren & Wetmore and built in 1921. Application is to replace terracotta with glass fiber reinforced concrete (GFRC) units.
Architect: Howard L. Zimmerman Architects & Engineers
HDC finds the use of GFRC to be inappropriate in this application and would like to see the restoration work completed using terra cotta.
Determination: No action. 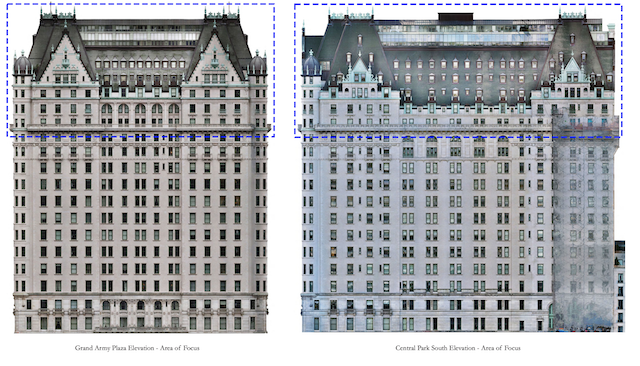 LPC-22-11584
630 Park Avenue – Upper East Side Historic District
CERTIFICATE OF APPROPRIATENESS
A neo-Renaissance style apartment building designed by J. E. R. Carpenter and built in 1916. Application is to construct a rear yard addition.
Architect: S W Engineering
HDC generally supports this proposal because it is largely invisible from the street, but we find the addition’s lack of facade articulation and detailing to be in need of further study and refinement. Perhaps the addition of a parapet above the second-floor windows would improve the appearance of this facade.
Determination: Unanimously Approved 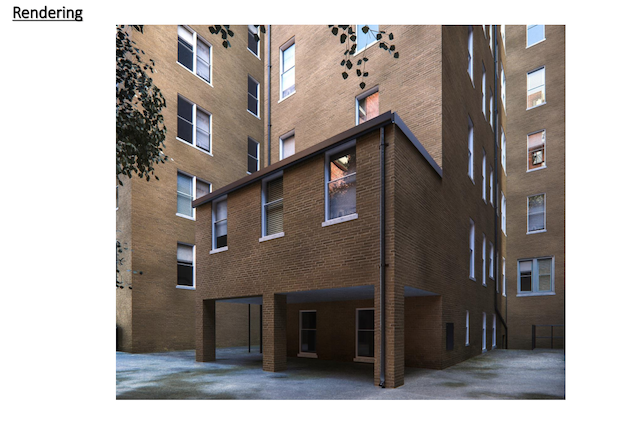