Linkedin
LPC-23-00428
1450 Pacific Street – Crown Heights North Historic District
CERTIFICATE OF APPROPRIATENESS
An Italianate/neo-Grec style freestanding house designed by G. Damen and built c. 1882. Application is to construct a rooftop addition and a roof deck at the garage, modify a masonry opening, and install a fence.
Architect: NC2 Architecture
While HDC believes that a rooftop addition may be appropriate for this building, we find that the current solution could use a bit more finesse. To be more specific, we believe that the rooftop addition should be more dormer-like in its detailing, so that it appears to have been an older, more traditional accretion. HDC is comfortable with the proposed ironwork in front of the house, but finds the ironwork in front of the garage to be an unnecessary element.
Determination: No action. Rooftop needs restudy.

LPC-22-05759
329 Greenwich Street – Tribeca West Historic District
CERTIFICATE OF APPROPRIATENESS
A Queen Anne style store and loft building designed by Samuel A. Warner and built in 1887. Application is to remove cast iron vault lights and granite pavers and replace the sidewalk.
Architecture: Costa Architecture & Engineering
HDC finds this proposed sidewalk work to be inappropriate. HDC appreciates the tricky nature of this sidewalk restoration and understands there is not a glaringly obvious solution here. But, we believe that the project should maximize the retention, or in-kind replacement, of historic materials, such as the granite slabs and the vault lights. We would ask the commission to work with the applicant to explore more sensitive solutions to this property.
Determination: No action. Continue to document existing conditions. 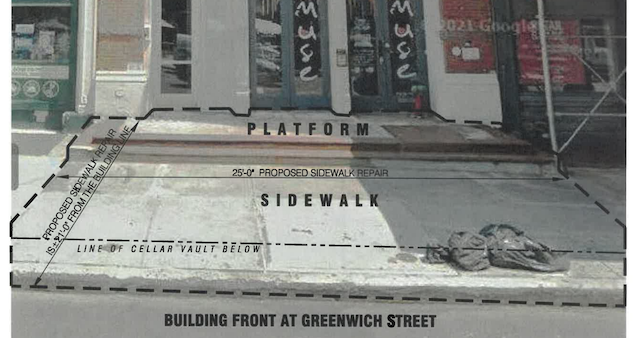 LPC-23-02665
738 Greenwich Street – Greenwich Village Historic District
CERTIFICATE OF APPROPRIATENESS
A garage designed by George G. Miller and built in 1930. Application is to modify window and door openings, install a canopy, demolition the rear of the building and construct new rear facades, construct a rooftop addition, and excavate the cellar.
Architect: Leroy Street Studio
HDC applauds this elegant and sensitive example of adaptive reuse. We would love and hope to see more garages and industrial structures so thoughtfully converted.
Determination: Approved with modification.

LPC-22-06991
396 6th Avenue – Greenwich Village Historic District
CERTIFICATE OF APPROPRIATENESS
A commercial building built in 1935 and altered in 1950. Application is to install signage.
Architect: Jacqueline Peu-Duvallon Historic Preservation Consulting
HDC finds this signage inappropriately overscale by 50%. HDC also objects to blacked-out windows where proposed and believes that the existing view into the building from the street should be retained.
Determination: Approved with modification

LPC-22-06360
68 Lexington Avenue – Sixty-Ninth Regiment Armory
ADVISORY REPORT
A Beaux-Arts Military style armory building designed by Hunt and Hunt and built in 1904-06. Application is to modify openings, install windows, doors, and plaques, and replace stairs with a ramp.
Architect: Marvel
HDC commends this outstanding proposal but notes that the stone plaques shown on page 24 should be recessed into the brick, and detailed to match the existing plaque above.
Determination: Unanimously approved

LPC-23-00609
3 East 78th Street – Metropolitan Museum Historic District
CERTIFICATE OF APPROPRIATENESS
A neo-French Renaissance style town house designed by C. P. H. Gilbert and built in 1897- 99. Application is to modify a window opening.
Architect: Scott Koniecko
HDC stands in agreement with our colleagues at FRIENDS of the Upper East Side Historic Districts and finds this proposal inappropriate. The applicant proposes removing historic materials. Instead, the applicant should use tilt-and-turn windows within the existing tracery. The applicant could be allowed to drop the sills to the level of the patio, but the historic stone mullion should not be sacrificed.
Determination: approved with modification. 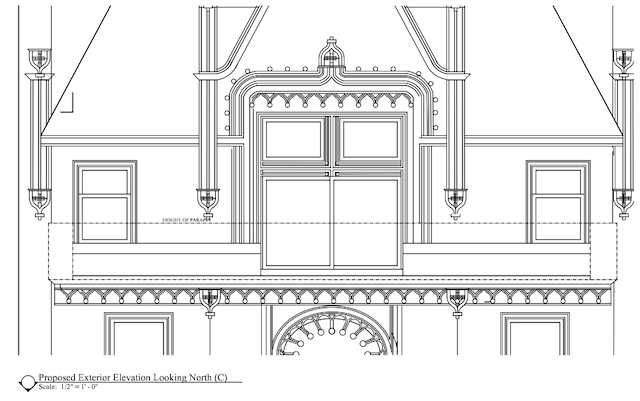 LPC-22-11297
22 East 81st Street – Metropolitan Museum Historic District
CERTIFICATE OF APPROPRIATENESS
A rowhouse, originally designed by Thom & Wilson and built in 1883-84, and remodeled c. 1977 with a new stucco façade. Application is to reclad the façade, replace windows and modify openings.
Architect: Lang
HDC finds this proposal to be not yet appropriate. The proportions of the masonry openings on all of the floors are too small and the first and second floors are not properly or hierarchically related to the upper floors of the building. Further, the proposed detailing of the building’s stone cladding is awkward and in need of more careful study and execution. HDC asks the commission to work with the applicant to further study and refine this scheme.
Held over 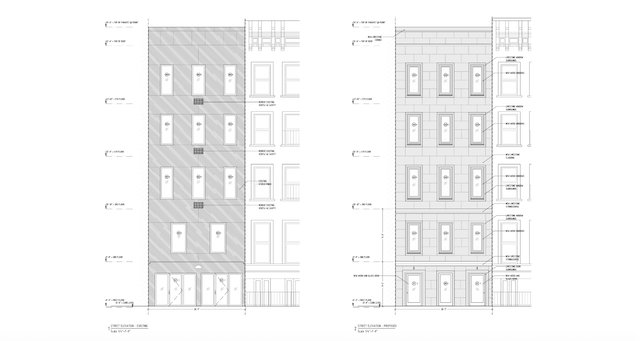