#PreservationPays Challenge winners have been announced ! Thank you to everyone who participated 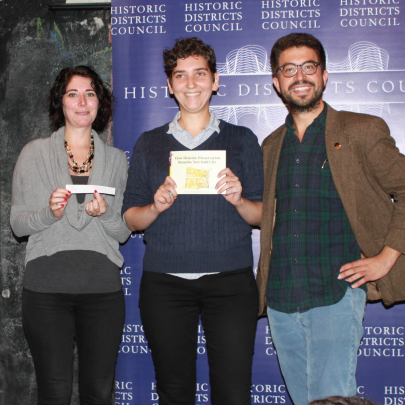 The Historic Districts Council, Sotheby’s International Realty, and Gothamist will announce the #PreservationPays Challenge winners on Wednesday, September 28 at Jimmy’s 43, 43 East 7th Street NY, NY 10003. This event is free and open to the public, everyone is welcome to join!

Five lucky winners will be treated to a private tour of the Woolworth Tower Residences in Lower Manhattan led by Historic Districts Council Adviser and official Woolworth Building Historian Lisa Renz. This tour, which is supported by Sotheby’s International Realty, is an once-in-a-lifetime opportunity to tour this iconic landmark.

Designed by noted architect Stanford White and modeled after the Arc de Triomphe in Paris, this 77-foot-tall triumphal arch was built in 1892 to celebrate the centennial of George Washington’s inauguration as the first President of the United States. How do you get to Carnegie Hall? Practice, practice, practice – and look for its rich façade of Roman brick, brownstone and terra cotta! This world-famous concert hall is celebrated for its impeccable acoustics – some of the best in the city. This lively neighborhood restaurant draws a broad array of patrons with its captivating brick façades and whimsical storefront. Home to one of the most magnificent groupings of apartment buildings in the city, this Queens enclave also boasts great restaurants, tree-lined streets, and a charming commercial spine. It was designated a New York City Historic District in 1993. This castle-like, highly-ornamented New York City Landmark was designed in a combination of the Romanesque Revival and Queen Anne styles and completed in 1890.  It was restored in 1998 after a disastrous fire in 1994, and now contains 46 units of affordable housing and is a prime example of how historic preservation and affordable housing can work together to superior and inspiring effect. More than a century after the start of its construction, Cass Gilbert’s neo-Gothic masterpiece remains, at 792 feet, one of New York City’s most iconic skyscrapers.