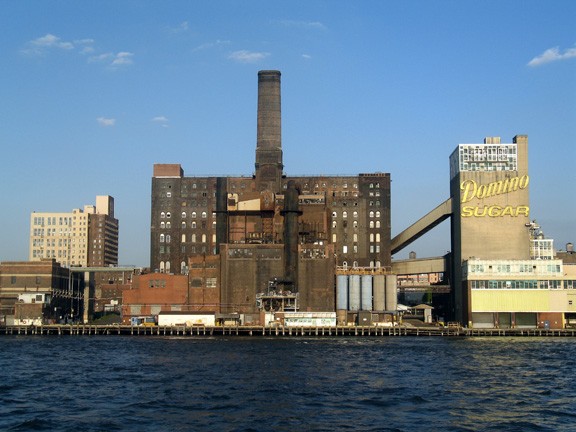 From Brownstoner (check it out for the action photos alone)

“Just moments ago, the Landmarks Preservation Commission unanimously voted to designate the Domino Sugar refinery building as a New York City Landmark, ending once and for all months of speculation about the historic manufacturing building’s fate. Although the site’s owner had in recent months come around to the idea of preserving the exterior of the refinery (which actually includes three buildings, the filter house, the pan house and the finishing house), today’s vote adds a nice layer of legal comfort to the development plan, which is still in the planning stages. One member of the commission said it was regrettable that the Domino’s iconic sign was not included in the designation but said she hoped it could be saved “through the powers of persuasion.”

Well, there’s still the problem of the vast majority of the site being un-protected and proposed for an ENORMOUS development (i.e. two 30-story towers and two 40-story towers) but this politely hands the mess over to City Planning to deal with.